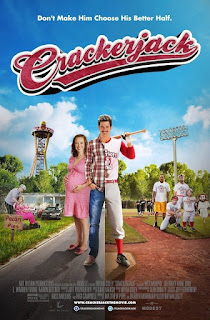 Plot from IMDB: A lovable loser must choose to either repeat his family history, change it or just go play softball.

"There ain't no place like the South...." First words. Jeff Foxworthy. I guess we're doing this.

So Bill Bailey IV is Crackerjack. Foxworthy is calling this a Southern folk tale. Or did he say fairy tale? Did he just say "little person"?

So the men in Bill's family have a history of running out on their families. Will Bill run out as well? Will he choose softball over his fiance? DO WE CARE?

There is some fat girl bullying Bill. I have no idea why. I don't know what is happening in this movie. Foxworthy's film is too deep!

Rumble on the muddy softball field. You know, cause Bill really takes his softball seriously. "This is our battlefield."

Like, lots of different people had to write this, they had to hold cameras, they had to do casting, they editied film... How did ANY of these people think this was going to be a good movie??

So... he swore off football, maybe he got drunk(?), and then he ended up at a church. Then he blacked out? So now random church mobsters are at his house to... make him... I don't know!

Oh, does the church want him for his softball skills? That actually seems like a good solution. No one would give him crap about his softball if he were playing for Jesus, right??

In slow-pitch softball, why would you put your best player at pitcher? Or even better... WHY PLAY SLOW-PITCH SOFTBALL?

Church league rules! No alcohol, no profanity, only ONE home run per game! And the Jesus mascot gets in on the brawl.

There's this one guy who doesn't talk and just always looks at Bill weird... I think he's an angel.

Look, in case I'm making it sound like the script and general story of this film are terrible, but maybe the music is OK... there is a song playing right now that keeps saying, "Pee-can pie."

Never mind. The angel dude talks. And is probably not an angel. But he has a new hood for Bill, who wrecked his last one. So maybe he IS an angel. I'm sticking with the angel theory.

I think this one lady is a prostitute. Or maybe SHE is an angel. Someone is definitely an angel here.

Crackerjack is not only a star adult softball player. He also collects quarters and Cabbage Patch Dolls.

I mean, this song is just the "Pee can pie" song, but he's singing "Honey bee" instead. Same song, dude. I promise.

You don't even want to know. You just don't.

I kinda miss the good ol' days, when Bill's only problems were his commitment issues and the Master Batters talking crap. This church drama is stressing me out.

Hold the phone... Bill Bailey just got kidnapped BY THE UNITED STATES ARMY. Oh wait, it was just his two friends in camouflage.

Guys, have a seat, cause I'm about to blow you away. They're eating at the GOLDEN CORRAL. Jeff Foxworthy is one committed bastard. I hope they get a $2.99 to-go box!

DIP IT IN THE FOUNTAIN. ALL OF IT. DO IT.

In other news, Speedgeek and I seem to be testing limits of the Captcha system in the comments here: 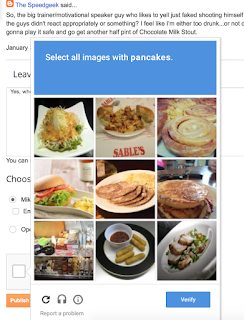 PLOT TWIST: Jeff Foxworthy is the angel! Golden Corral is heaven! The chocolate fountain is the RIVER OF LIFE. The filthy, disgusting, but CHOCOLATE river of life.

Bill babysits a kid. "Did he behave?" "Like an ANGEL." I'm telling you. It's coming.

Also, I realize I'm not really commenting a whole lot on the plot here, but it's really quite simple. Church dudes help Crackerjack find balance in his life, and he commits to his pregnant fiance. And he runs into a small lake for some reason.

I wonder if IHOP is open.

There's 15 minutes left. They're building up to something huge. Yet, if the screen went black, and a message popped up saying, "Sorry, we ran out of money and couldn't finish Crackerjack," I'd be like, "Eh, oh well. When does the Australian Open final start?" That's not what Foxworthy wanted to hear, I bet. Not with all this sad violin music playing!

Why is he standing on his car like it's the Titanic?

No movie can reach its true peak without a Piggly Wiggly bag. 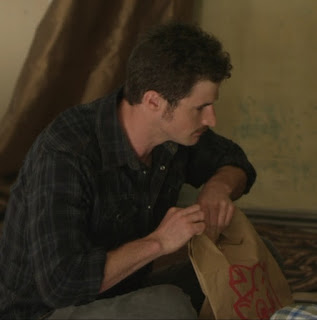 Oh... the old "engagement ring in the Golden Corral roll." Been there, buddy.

Hooray, we did it. I wish I could say Foxworthy made a decent movie, but... this one was pretty rough. Definitely better than Fumbleheads though.

Thanks to Speedgeek for joining me this time! Made it even better.

Thanks to anyone else who followed along or who is checking out the archived final notes.

And with yet another song singing about "pee-cans," I'm gonna turn this off now.

Lots of complex characters here. I can't believe we didn't see this up for a "Best Original Screenplay" a couple years ago. Oh, wait. Now, there's a guy standing in the road with a sombrero. I guess.

Oh, but the sombrero guy made Bill crash into a church! We're all good here.

You think these actors show this film to their families? Or do they hide the DVDs under their beds?

That big guy was lying. I know cars. That car's hood was not fixable.

They're sinking to dishonesty in the name of softball.

Here we go. Here's where the expository dialogue right up front in the first 3 minutes comes in handy. Now, we don't have to wonder about why Bill might be conflicted about being a dad. I want to shake the hand of the script writer. Because my Black Watch Milk Stout is starting to affect my attention span.

I haven't had a beer since the LSU game, and I still don't understand half of this.

What terrible luck for that other team to have three straight hits hit the top of the wall, but not go for home runs. Oh, wait, there's a home run limit in slow pitch, isn't there? Substitute out "what terrible luck" for "how convenient" in my original statement.

I'm going to assume that the girl scout who keeps looking for Bill to collect her money is the niece of the now-grown-up paperboy from "Better Off Dead". "I WANT MY TWO DOLLARS!"

Yeah, I was thinking that. I was gonna say daughter, but he did ride off of a cliff.

I know we still have an hour to go here, Mike, but how does this stack up with "Chicks With Sticks" (which I'm still kicking myself for not staying up for)? Better? Worse? Which made you feel more like you had a head injury?

I think Chicks With Sticks was better than this. I think Fumbleheads was worse, believe it or not.

Oh, I'm sure there are angels here somewhere. And it's probably the prostitute. Everybody knows they're mostly angels in disguise.

I just saw this on the synopsis on IMDB: "In the offbeat style of NAPOLEON DYNAMITE..." Sorry, folks, but the only way this movie resembles Napoleon Dynamite is in how some of the rooms have wood paneling. Oh, and the guy in the road with the sombrero is named "Pedro". The similarities end there.

On the prostitute tip, IMDB lists no less than EIGHT characters with the simple title of "prostitute". This screenwriter had hookers on the brain, no doubt about it.

Ah... That makes a lot of sense. It's one of those "let's try to make a Napoleon Dynamite" film.

So, the big trainer/motivational speaker guy who likes to yell just faked shooting himself in his fake leg? But the guys didn't react appropriately or something? I feel like I'm either too drunk...or not drunk enough. I'm gonna play it safe and go get another half pint of Chocolate Milk Stout.

Yes, when it comes to Crackerjack, always go with not drunk enough.

It would appear that Golden Corral paid for some product placement. Or provided catering in return for a scene being filmed in a fully signed restaurant.

Oh, see, this is where I'm an idiot and admit that I forgot that Foxworthy is a spokesman for Golden Corral.

Also, the main character's name is "CJ"? Since when? Why does everybody keep calling him "Bill Bailey"? I'm officially "not drunk enough".

Sherry calls him CJ for "Crackerjack."

"PLOT TWIST: Jeff Foxworthy is the angel! Golden Corral is heaven! The chocolate fountain is the RIVER OF LIFE. The filthy, disgusting, but CHOCOLATE river of life."

THIS is the new highlight of my day. And I've had two beers that I've rated as 4.5s on Untappd.

I'm not convinced that anybody involved with this movie ever saw a baseball or softball game before filming started.

IT'S TIME FOR ALL THE PROSTITUTES!

Is he collecting dolls because he's trying to make money off of them? He was selling one to somebody early on in the film. And everybody knows that's the best way to get rich, anyway.

For real, though, did Jeff Foxworthy watch this movie and say "yeah, this is really good"? Because if so, he was wrong.

I'm so wasted. I think. It's hard to tell, because I basically just stopped being able to understand a single thing that was happening in that movie. It's entirely possible I'm completely sober.

Haha. No, it was all over the place. What was the deal with the Opposite Day lady and her kid and the Piggly Wiggly bag? I have no clue!