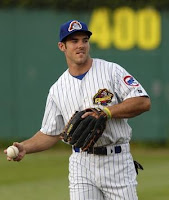 Look, I like Matt Szczur, in a "possible 5th or 6th outfielder with some hidden potential" kind of way. But there's no doubt that the recent outfield transactions made by the Chicago Cubs, while upgrading the roster, have likely had a large impact on Szczur's chances of making the team this year.

12.01.15 - Well, it looks like Fowler is probably gone. Maybe Baez will start playing some outfield. But either way, I could have a shot at the 4th or 5th outfield slot next year, assuming Almora doesn't explode like Bryant, Soler, Russell, and Schwarber did last year.

12.15.15 - Signed Heyward to an 8-year deal. OK, that affects the OF. Still, with Heyward, Soler, and Schwarber, that might leave Coghlan and me going for two spots. This could work!

02.25.16 - (1st entry) Coghlan got traded. Well, that's a surprise, but we had a lot of depth and flexibility, especially with Baez and Zobrist on the roster. Things could be looking up!

02.25.16 - (2nd entry) Fowler is back?! How in the hell did that happen? One minute I'm shagging flies, the next minute Dexter is out here hugging everyone. This is outrageous.

02.26.16 - Victorino?! We signed Shane Victorino?! Cheese and rice. If anyone needs me, I'll just be binge-watching "Fuller House" with Matt Murton today, waiting for us to sign Ian Desmond or Austin Jackson.
Posted by Mike at 2:24 PM No comments:

LSU Tigers Must Improve at the Free Throw Line

Last March I watched the LSU Tigers completely give away an NCAA Tournament game to N.C. State. Although the Tigers were the lower seed in the opening 8-9 matchup, they held way more talent and potential than their 22-11 record showed. With two legitimate stars in Jarell Martin and Jordan Mickey, it felt like the Tigers could make a run. Unfortunately, LSU managed to make only 12 of its 22 free throws (with Mickey going 4-for-9) and lost by one point.

It was miserable. It was a terrible way to end such a promising season. And it was the one thing I hoped would be better in 2015-16.

Unfortunately, it isn't. Yes, Coach Johnny Jones doesn't shoot the free throws. But there has to be a way to get his players to make more of them.

Last night, LSU was surprised by Alabama at home, losing 76-69 for its second loss in three games. The Tigers seemed to be in control most of the way, and they were certainly never truly out of it until the final minute or so. They didn't play any worse than the Crimson Tide, and they didn't make a bunch of plays that felt out of character for this year's roster, which has been way too inconsistent overall. Alabama simply won the game by being the better team in the final five minutes.

But once again, missed free throws contributed significantly to another crushing defeat. The Tigers shot 20-for-35 from the line (57.1 percent), with most of the shots and misses coming from Ben Simmons, who was 10-for-19. (Yes, I know the team likely wouldn't be as successful as it is without Simmons in the first place, but that logic didn't help much last year either.) By comparison, Alabama's Retin Obasohan shot 11-for-11 from the stripe alone.

The free throw situation needs to improve before fans should expect any outcome different from last year, assuming the Tigers do even get a tournament bid in March. In fact, of the regular contributors, only Keith Hornsby (81.8) is shooting better than 70 percent at the line. That's a huge problem, one that will continue to impact the outcomes of games as the season winds down, unless the Tigers find a way to fix it.

The team is now 16-10, has lost on two Wednesdays in a row, and will now finish with three out of five games on the road, including the regular season finale at Kentucky. Entering the conference tournament with 20 wins seemed fairly certain a couple of weeks ago, but now it'd probably take a four-game win streak starting this weekend in order to pull it off.
Posted by Mike at 1:11 PM No comments:

It's 2016, and the Cubs just invited Matt Murton to Spring Training

I know what you're thinking. "Are you an idiot?" "Have you not gotten any sleep since Blogathon?" "Wasn't 'Crackerjack' such a great movie?"

OK, no one is thinking that last one, aside from maybe Speedgeek.

But I'm sure you're all definitely thinking, "Matt Murton? He'd be like 68 years old now! He couldn't coach these kids, let alone play with them!"

Well, you're wrong. Not only is he half that age (34), but he is indeed also going to be in Arizona with the Cubs this spring as a player. Although he likely doesn't have much of a chance to make the final major league roster, he's an interesting player to have in the organization, stashed at AAA Iowa, for example.

First of all, realize that Murton was a career .286 hitter before leaving for Japan after 2009. His numbers with the Cubs were even better: .294 average and .362 OBP through parts of four seasons. (For what it's worth, through seven seasons in Japan, those totals are .310/.354.) I'm totally on board with giving some plate appearances to anyone who can get on base in front of the team's big hitters.

But also, let's look at the current state of the Cubs outfield. If the starters are Kyle Schwarber, Jason Heyward, and Jorge Soler, then only Soler bats from the right side. If Chris Coghlan is the fourth outfielder, that's another left-handed bat. So if things stay as they are currently, right-handed depth could be needed soon, even if right-handed Matt Szczur is the fifth outfielder.

(Of course, there are wildcards here. Infielders Ben Zobrist, a switch hitter, and righty Javy Baez may see time in the outfield. There's also Albert Almora, a right-hander that everyone is pulling for to be the team's next young star. And I'm still not fully convinced that the Cubs won't bring back Dexter Fowler, another switch hitter.)

Either way, even if Murton never contributes in Chicago again, it's a fun signing. It'll be great when Speedgeek and I can sit just a few feet away from him as he patrols the outfield in Nashville when the Iowa Cubs come to town to face the Sounds. Hey, maybe they can get Mark Prior on the mound too?
Posted by Mike at 5:45 PM 2 comments:

Can Tecmo Bowl Tell the Future?

So we've done our Tecmo Super Bowl prediction for eight years now, but this is the first time we let the computer control both teams and used updated rosters. Granted, our rosters were one year old, but it was still most of the key players from this year's Denver Broncos and Carolina Panthers.

So how close were we? In many ways, we were pretty close!

Below are some of the similarities that I noticed as I watched Super Bowl 50:


Overall, I'd say our Tecmo preview/prediction was fairly accurate, especially when considering most people saw the Broncos as huge underdogs. Next year we'll try to have the most updated rosters we can find. 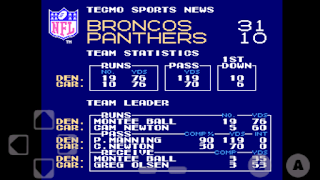 In my 8th annual Tecmo Super Bowl prediction, I'll be changing things up again. For the first five years, I picked the team I wanted to win the game, and I played a game of Tecmo Suer Bowl against the other team, which was controlled by the computer. Of course I always won, but when I picked the wrong team in 2014, we decided I should start allowing the computer to control both teams. (My prediction was wrong again in 2015.)

This year I had the computer controlling both teams again; however, the version of Tecmo Super Bowl that I now have on my phone includes modern teams and rosters. Technology! Unfortunately, my rosters were last updated for the 2014 season, so there are some differences. But we still got to see how Peyton Manning's Broncos performed against Cam Newton's Panthers... in an ancient video game.

Regardless of how we got there, the outcome of this year's Super Bowl is clear:

The Denver Broncos will defeat the Carolina Panthers.

Denver won the coin toss (there's your prop bet prediction), took the ball first, and started at its 45. Running back Montee Ball dominated from the beginning, as Manning mixed in passes to Wes Welker and Emmanuel Sanders. The drive stalled in the redzone though, after a third-down sack by Thomas Davis. The Broncos kicked a field goal to go up 3-0 and never trailed in the game.

The Panthers had nothing going in their first possession and quickly punted back to the Broncos. Luke Kuechly got a sack on the first play of the drive, but then Manning hit Sanders with a 20-yard pass and a first down to end the quarter.

Manning opened the quarter with passes to Ball and Demaryius Thomas, and then Montee carried the ball in (get it?) for the game's first touchdown. Denver led 10-0. 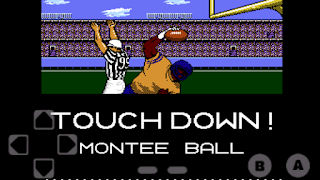 The Panthers struck right back. Newton scrambled for 30+ yards, completed a screen to Deangelo Williams, and then scored on another run to cut the score to 10-7. 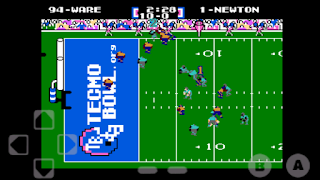 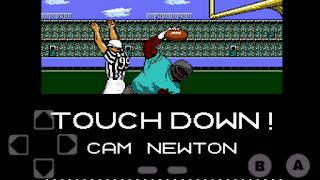 Manning got the ball back and worked the two-minute drill like he does in real life, passing to Welker, handing off to Ball, and then throwing a 30-yard score to Ball on a screen. The Broncos led 17-7 at the half. 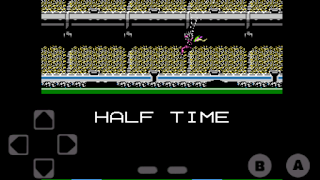 Newton opened the half by gaining some yards on the ground and completing a pass to Greg Olsen. But things stalled near mid-field when Terrance Knighton grabbed his second sack of the game (or the total amount of sacks he actually had in the entire 2014 season). 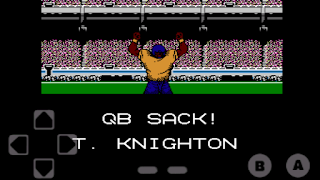 Carolina's defense put the team in great shape, forcing a punt after another sack by Davis. But Newton failed to complete a pass, and the Panthers punted it right back. Still, Carolina stopped Denver once again to force another punt at the start of the final quarter.

Newton quickly completed a big pass to Olsen for 22 yards and looked ready to drive down and tie the game. Unfortunately, he was sacked on the next play and fumbled the ball. Denver's Danny Trevathan picked it up and ran it back the Carolina 11, essentially securing the win for Denver. 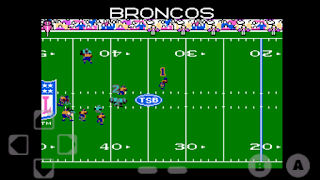 Ball took four rushes to get it in but finally made it 24-10. 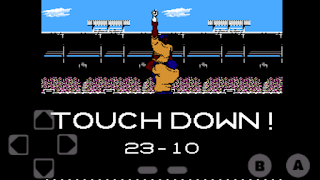 Cam Newton threw four straight incomplete passes on the next possession (and of course, as a New Orleans Saints fan, I'd love to see this actually happen on Sunday). Manning took over, completed a pass to Julius Thomas, and then handed off to Ball for yet another touchdown. Broncos went up 31-10 to end the scoring. 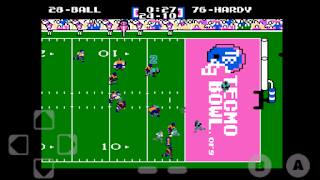 Newton completed another pass to Olsen at the end of the game, but it was too late. He ended the game with 30 percent of his passes completed, compared to Manning's 90 percent. Newton did look good when he ran, but he wasn't nearly as good as Ball, who scored four times.

Here's a look at the final Tecmo Sports News. See you next year! 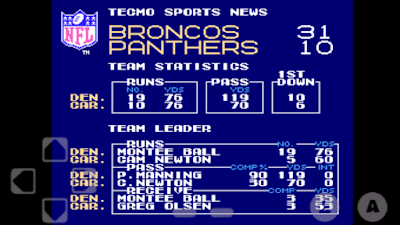