When your mom decides to call you just as they're taking your picture for your rookie card... 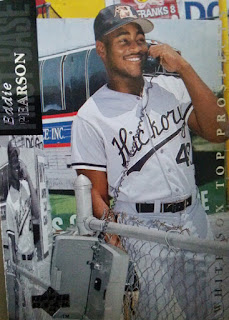 Yes, it's only been one game so far, but on Opening Night, the Chicago Cubs illustrated exactly why fans are so excited for this season, firing on all cylinders and defeating the Angels 9-0.

First, consider the fact that Kris Bryant, Kyle Schwarber, and Addison Russell combined to go 0-for-10 with five stikeouts, and the offense still posted NINE runs. In fact, even without a hit, Bryant walked twice, scored twice, and drove in a run.

More importantly, this lineup is so strong, particularly when using the DH in an American League park, that Miguel Montero hits EIGHTH. It's not a surprise that he was the offensive hero in the opener, hitting a home run and driving in three runs. Montero is more of a cleanup hitter than anything else, with more than 1,000 career at-bats hitting fourth in the lineup, more than any other lineup position. Having him at the bottom of the order is just another strength of this Cubs team.

And just yesterday I mentioned that I hoped Matt Szczur would get a chance to contribute before Javier Baez returns from the DL, and of course Szczur knocked in three runs on his only at-bat in the opener.

The Cubs scored nine runs against a good team on a night when one run would've been enough, thanks to Jake Arrieta's dominance. This lineup is intimidating, to say the least. Obviously, teams will beat the Cubs this year. But it won't be easy.
Posted by Mike at 2:46 PM No comments:

A Look at the 2016 Chicago Cubs Opening Day Roster

There are no real surprises on the 2016 Chicago Cubs Opening Day roster. The team breaks camp with one of the best 25-man rosters in the league, if not the best. After a surprising 2015 season that saw many of the organization's top prospects called up and placed into significant roles, and ended with an NLCS appearance, the Cubs front office made it clear this offseason that the team is being built to win now.

Adding star players Jason Heyward and John Lackey not only improves the Cubs, but it immediately weakens  division rivals (and 2015 NL Central champs), the St. Louis Cardinals. Throw in newcomers Ben Zobrist and Adam Warren, and we can see clear upgrades to a roster that won 97 games last year. That's kind of amazing.

Manager Joe Maddon now has all kinds of flexibility, just as he likes it. Zobrist can play anywhere, and although Javy Baez will be on the DL for the first week or so, he is being groomed to be another Zobrist. Heyward and Dexter Fowler can play anywhere in the outfield, while Kyle Schwarber is actually going to do some catching in addition to playing left field. And of course, Kris Bryant has proven he can do pretty much anything better than pretty much anyone.

On the pitching side, having Lackey jump into the rotation's number three slot behind Jake Arrieta and Jon Lester suddenly has people saying this might be the league's best staff. Jason Hammel struggled a little in the second half last year, but his 3.74 ERA looks terrific for a 4th starter. Furthermore, with 15 wins and a 3.49 ERA over his first 1.5 seasons, Kyle Hendricks could be the best 5th starter out there.

And then there's the flexibility in the bullpen, where the Cubs have somehow piled up effective starters who are now serving as relievers. Warren, Trevor Cahill, Clayton Richard, and Travis Wood could all stretch out as starters if needed, and the Cubs have the kind of offense that could keep the team in contention even if some of these bullpen arms had to become starters.

I should definitely mention Matt Szczur, who I had fun with in a recent post, following all of the outfield moves the Cubs made. In the end, with Baez on the DL, it's Szczur who grabbed the last roster spot for now. What makes it more impressive is that Baez could've easily been replaced by infielder Munenori Kawasaki, who hit an impressive .367 this spring, with an OBP of .446 through 49 at bats. But Szczur, who is out of options, hit .375 to secure the spot and stick with the team, at least for a little while. I'm hoping he gets the chance to make the most of it.

The flexibility doesn't stop with the major league roster, as the Cubs have talented players like Kawasaki and Shane Victorino signed to minor league deals. In addition, the next group of prosepcts could be ready soon as well, and players like Jeimer Candelario, Wilson Contreras, Albert Almora, and others could make things very interesting at some point soon (or could be used as trade chips to upgrade the major league team if/when needed).

As a Cubs fan, this is probably the best team I've ever been able to watch. I'm ready for the season to kick off tonight, and I'm hoping it ends with a World Series win in the fall.
Posted by Mike at 3:09 PM No comments: