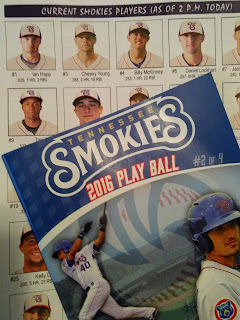 Although the AA Tennessee Smokies (Chicago Cubs) play just a few hours away from where I am in Nashville, I never got a chance to see recent prospects like Kris Bryant and Kyle Schwarber. Their time at that level was so brief, and it just never fit into my schedule. So when I learned that Ian Happ was promoted to Tennessee last week, I checked the schedule and determined that this past weekend was my only good chance to get over there.

So Sunday morning we drove east and checked out the game at Smokies Stadium that night, as Tennessee beat the Pensacola Blue Wahoos 3-0.

Happ had three hits the night before, including his first AA home run. He picked right up in Sunday's game, and I got to see him get three more hits. Happ clearly is a player on the rise, much like the top prospects before him, who are doing so well in Chicago and Iowa now. He honestly already seemed kind of out of place on the field, even though he'd just arrived.

Of course, he followed this up with another three hits last night (and another home run). So he's 11-for-15 through five games, and his AVG/OBP/OPS are a ridiculous .733/.706/1.973. Maybe Pensacola is just terrible? I know the Cubs want these guys to experience struggles at each level, but so far that isn't happening for Happ at AA. 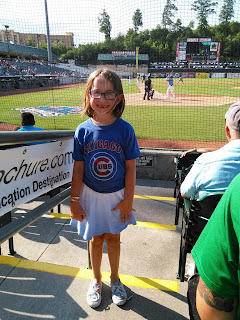 Overall it was a great experience. For a family of five, we got the tickets, meal vouchers, and three Kid Zone passes for about $4 more than it cost us to see Finding Dory the weekend before. I've been to hundreds of games, including MLB, college, and high school, but living in New Orleans and Nashville my whole life, I've only been to AAA minor league games. I now have to say that AA is a much better value. While I usually go for the "cheap" seats in the outfield (which is like $10-12 for a AAA Nashville Sounds game), at Smokies Stadium we sat five rows directly behind home plate and paid less to do so.

In addition to being able to see Happ play, I was looking forward to watching a few other players as well. I think we'll be seeing the following players at the major league level eventually:

Billy McKinney - I've been keeping an eye on McKnney's progress since the Cubs acquired him in the Samardzija/Russell deal and have written about him here before. He had two hits, a walk, and a run, and he looked great. He's only hitting .264 at Tennessee this year, but the average is improving. His OBP is .365 (up from .346 at AA last season), and his strike out to walk ratio is 35:50.

Victor Caratini - He was 0-for-3 in the game we saw, but he looked good behind the plate in a Tennessee shut out. He's hitting .295 for the season, with an OBP of .386. He has also started 13 games at first base and has not made an error there this season. Originally a third baseman, Caratini could make the catching situation in Chicago even more interesting within the next year or so. If David Ross is truly done and Miguel Montero keeps playing the way he currently is, I think we'll be looking at Contreras and Schwarber as the two main catchers for 2017. Adding Caratini to the mix would give the team a third catcher who also plays other positions.

Paul Blackburn - A 2012 1st round pick out of high school, Blackburn has lowered his ERA each year so far. His career ERA is 3.02, and it is currently at 2.35 following Sunday's six scoreless innings. He's 5-2 for the year with a career record of 25-14. His 84 innings and 53 strike outs lead the Smokies.

Jacob Hannemann - While he hasn't hit for a high average in the minors, Hannemann is exciting on the bases. He stole a base and was caught once on Sunday, bringing his totals in those categories to 25 and 7. He led off the game with a nice slap hit to the opposite field, bouncing it over the third baseman's head. He has only 25 walks and an OBP of .323, but if he gets those numbers up, he'll be fun to watch.

Joe Nathan - Nathan is currently at Tennessee, trying to get back to the majors. It would've been fun to see him pitch, and a healthy Nathan will look nice in Chicago's bullpen.

Brad Markey - Markey started Monday night, so we missed him by a day. He's a 2014 19th round pick out of Virginia Tech who has a 2.13 ERA in the minors so far. He's been at Tennessee all season, and his 6 wins lead the team. His 2.34 is right under Blackburn's and leads Tennessee starters.

We definitely had a lot of fun. I'm hoping we can make it back there later this season, especially if something like a Gleyber Torres promotion happens at some point. 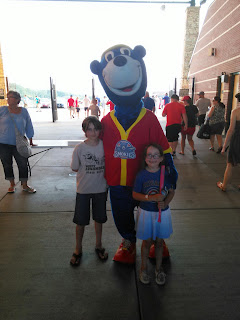 The Cubs are losing, but the young players are getting experience

The current four-game losing streak that the Cubs are experiencing is not a reason for fans to panic. Not yet, anyway. Yes, it's never fun to be swept by the Cardinals. And you hope to (A) score more than two runs in Miami and/or (B) not see your 8th inning reliever give up those runs in a 4-2 loss. But there is much more going on here.

The Cubs will now try to bounce back from their longest losing streak of the season, yet they enter the weekend with a firm nine-game lead. What's more important, though, is the fact that more young players are getting work at this level here in June.

Remember last year in the postseason when Javy Baez hit the huge home run against St. Louis? Fans love it when Chicago puts these guys in big spots and they come through like that. But it isn't magic. Baez had to get enough time in the league to get to that point. And this is exactly what we're seeing right now with Contreras and Almora (and possibly a couple of relievers as well).

I believe that the front office and coaching staff see Almora and Contreras as key players down the stretch and into the postseason. If this is true, it has to start now. These innings and at-bats might not seem very important here in June. But in September (and hopefully October), every bit of experience could pay off.

This really shouldn't even be a surprise to Cubs fans, as the team is sort of making this a routine now. The only difference now, of course, is the huge division lead. Yes, the lead has dipped to single digits. But give it just give it a minute for things to start to click again.

Furthermore, for a guy like Contreras to get the promotion and to have immediate success seems about right when looking at the team's track record.

Taking this a step further, I am personally interested in another guy currently at AAA Iowa: Dan Vogelbach. Through 228 AAA at-bats, he's posted a similar .298/.419/.941 at Iowa this season. The average matches Bryant's, while the OBP is better than both Bryant and Schwarber. I know, I know. There's nowhere to play him in Chicago. Of course, we never expected to see Willson Contreras playing first base last night either, did we? All I know is that these other players were obviously ready to come up within 200 at-bats or fewer, and Vogelbach's time could be coming soon.

I assume the Cubs front office is watching all of these stats and more, considering possibly finding  a spot for Vogelbach in Chicago or (more likely) making other teams aware of the numbers as the trade deadline approaches. Either way, the success of Bryant, Schwarber, and Contreras could lead to a call-up or a significant trade when it comes to Vogelbach.

The system is working, and we cannot get caught up in a four-game losing streak and begin to think otherwise. Hopefully in the fall, we'll look back at this time as the week where we saw what Contreras was really capable of: owning the catcher position, filling in at first base, and driving in some of the team's only runs in the midst of its worst losing streak.

Here is another set of baseball songs from Vista Blue! Check out a great review from Faster and Louder, and look for a CD coming soon featuring all 20 of the band's baseball songs recorded so far.