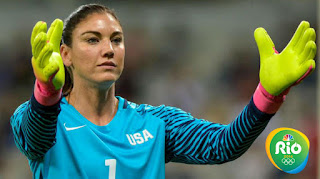 August 5th is finally here. Although we've been trying to watch some of the soccer the last couple of days, the 2016 Rio Summer Olympics officially begin tonight with the Opening Ceremonies. If you missed Wedge's updated piece on the history of the Olympic Cauldron, definitely check that out.

There will be a lot to keep up with over the next two weeks, and I don't know much about a lot of the sports other than the fact that track cycling duels are the best thing ever. I'm also confident that I'll have the whole TV channel rotation figured out right around the time that it all wraps up. (It won't help that I'm trying to switch cable providers ASAP, possibly giving me a new set of channels to learn in the middle of the Olympics!)

For now, though, here are five interesting notes that I discovered this week... (I'm sure some of this is common knowledge for some readers, but I'm just a dumb American baseball fan!)

1. There is a Refugee Olympic Team. This is amazing, and I can't wait to see them in tonight's ceremonies and will hopefully catch some of them competing.

2. The U.S. has never medaled in several popular sports, including table tennis, handball, and badminton. Maybe this is our year! (Have I ever posted about my college intramural badminton experience?)

3. Apparently a guy on the sailing team has to regularly hold a section of rope in his mouth throughout the race. This year's water issues aside, imagine growing up wanting to be the mouth rope guy!

4. Apparently the crowd in Rio will boo an Olympic goalie who is currently shutting the other team out simply because she doesn't really want to catch the Zika virus.