Its Time for Full Pool Play in Team Ninja Warrior

So here at GBS, we've tend to focus on sports with sanctioning bodies who have giant rulebooks, scoring mechanisms and usually years of record books and statistics we can dive into.

Today is going to be a little different as we're going to dive into one of the most relatively young sports out there, and a competition withing that sport even younger (2 years old), that to my knowledge, does not have today have a literal rulebook.

For any readers unfamiliar with "Ninja Warrior," it is competition that originated in Japan in 1997 as Sasuke. (this competition would be re-branded and shown with subtitles in the USA as Ninja Warrior). The concept is simple to understand/watch, there are 100 competitors who take turns trying to conquer a ridiculously difficult obstacle course that is split into 4 levels. Only people who complete level 1 move on to level 2 and so forth until all competitors are eliminated or until they all try level 4. Some levels have time limits, some do not. Sasuke has been on for some time now going well over 30 seasons. eight years ago they started making a version in the USA simply known as American Ninja Warrior; with the biggest difference being that ANW starts with several hundreds of competitors in qualifiers around the country qualifying for one of the final 100 spots that get to try the 4-level competition course located in Las Vegas.

The competition/show gets great reviews and at this point there's 20+ countries that have their own national version. While there is some backstory elements to its Tv production, at the end of the day its a sport/competition with concrete rules. Someone who is a genius however realized that there could be a fun out-of-season off-shoot, whereby they team competitors ("ninjas") up, and put them head to head on parallel courses and its generally one of the most exciting sports you will ever see in person or on TV. Honestly it will likely make it to the Olympics within the next decade or 2, or so we hope (remember parkour is currently fighting for a place with the IOC). 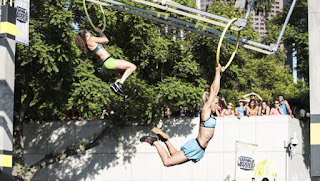 Team Ninja Warrior (TNW) competition is simple: you have teams of 3 (2 males 1 female) who take turns matching up against another team to run the course together. Each team member runs once.

The problem, I assume this presented the producers, is that if one match started out 2-0/0-2 then the 3rd race would become pointless. As a result Team Ninja Warrior is formatted as:

If a match ends in a 2-2 point tie, then there is a 4th race to break the tie. You may already see how this is flawed as a "team" competition, but lets keep going before we get into that.

The tournament is comprised of 4-team pools like the World Cup/World Baseball Classic, however only 1 team advances much like the 1st and 3rd rounds of the NCAA College World Series. The big difference being the NCAA baseball tournament pools operate on double elimination. Team Ninja Warrior, for either timing or editing constraints, limits their pools to only 2 rounds/matchups as follows: 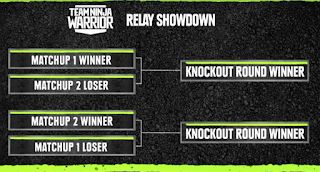 The 2nd round is the elimination round meaning whoever loses that matchup is out. The two Round 2 winners then go to a single "relay showdown" wherby all 3 members of the teams participate together in a head-to-head relay race on an extended course.

The show has gotten very good ratings considering it was first on the widely unknown Esquire Network, and now moved to USA-Network. Its likely the ratings will stay up, and more tournaments/seasons are coming, which is why we want to take this time to tell the Ninja Warrior governing body that its time to take this seriously as a sporting format, which means fairness should be of the utmost importance. If this is truly meant to be a team competition it should value the best teams...

So what's the problem?


The format of the dual courses is great, the teams of 3 is nice and balanced, its simply the fragmented pool structure/point scoring that needs corrected. In the current format, all four teams can end with a 1-1 record, yet 2 get to advance. If you went down to individual races/matchups (3 per round) you can literally have the teams end:

...and have Teams C and D go to the final showdown. How? Because the way it is setup, the only matchup that really matters is the anchor run in the 2nd round. You can go 0-5 in your first 5 matches, win the final match (worth 2 points) which forces a 2-2 tie-breaker and then you win that tiebreaker to move on. If you count the tie-breaker as its own race it doesn't look much better:

Teams A and B are still clearly the better teams, and they won more scheduled races than both their opponents, so why aren't they advancing?


In the first season of Team Ninja Warrior, this format generally held out ok as the better teams tended to win the 2nd Round anchor matches anyhow. Most winning teams went some variation of 6-0, 5-1, or 5-2 in their races.

But season 2 of Team Ninja Warrior has been a very mixed bag and in some cases a mess from a sporting/fairness standpoint. There have been multiple instances of 5-1 teams being sent home. then there's also been a wild card pool in which they brought back teams who did well but didn't win their pool (some of them those aforementioned 5-1 teams) and those teams proceeded to go 5-1 again without advancing. Multiple instances of teams advancing only due to their captain/anchor. Why?

The point of difference between the Team competition and the normal show is that its supposed to be based on a team collective effort. There was a team one night that went 1-5 where one member literally couldn't get past the 3rd obstacle in 3 different matches, yet they made the final showdown. Why?

So potentially due to time constraints and/or the fear of "pointless" 3rd matches TNW has created a larger issue on the opposite end, only 1 match matters in fragmented pool play. Frankly, if this were a big-time sport with money on the line, a team GM would just have the team sit out the first 5 matches, and put everything into the 2nd anchor run since its the only match that truly matters.


But we here at GBS don't just point out problems and walk away, we need to present a workable solution, so here goes.


Rule #1 - Team Ninja Warrior should award 1 point for all races, thereby assuring that a better team wins a matchup, not just the team with the strongest anchor.

Rule #2 - TNW should adopt round-robin pool play like all other major sporting events. Every team contests a match against all the other 3 teams in the pool.

Just like the World Cup, WBC, CWS, name any big tournament and that is what pool play looks like. This means each team faces the other 3 in the pool, each team member has 3 matches no matter what.

But what about breaking ties? Like any tournament with pool play, ties are a possible occurrence, with TNW this is no different as follows if looking at the team matchups these are the two most common ties in pool play: 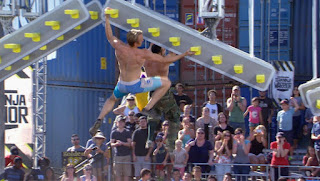 So now you see how that 3rd race match-up matters even if you are down 0-2. Winning that 3rd match might break a tie for you in the pool.

So now look at the pool with more context:


Team A dominated, everyone else was even-ish except Team B was able to steal a run from Team A thus winning more races than C and D, tie broken. You can quickly see how this is hugely beneficial.

Solving the "only has a strong anchor" issue: So now what happens when a team has some weaker members but a strong anchor as we've seen a bit this season? Overall they'd go 0-3 with a race record of 3-6.  So the pools would start with standings like this after Team D (strong anchor) has completed all their matches:

Then the remaining match-ups by default are going to determine who advances. so then lets assume Team A wins all its other matches:

...that leaves the B vs C match-up to determine who goes to the relay showdown, with your only 2 options being a 3-0 win or 2-1 win by one of those teams:


Now we have a clear separation of teams thats in the hands of the teams without making any one member more important than the others. Teams have to take care of winning races/points and not throwing any away and relying on a 2nd anchor run.

Worst Case Scenario... what about ties? So yes, its not always going to end in a perfect 4 team ranking to look at total win/loss and then break ties with points/races. but that doesn' mean we don't still have easy solutions to implement. What if one team dominates and then the remaining 3 teams are closely matched? Mathematically, yes you can end up in a 3-way tie like this:

That works just fine, but also leaves a problem with 3-way ties which leads us to...

This would incentive teams to still go out and hit buzzers even if their opponent has fallen. So now we're looking at this:


Now we have a clear 1st, 2nd, 3rd and 4th place team all done via how they performed on the course. It would be rare to need to go to this level, but if needed, its so easy to understand by casual viewers, competitors and there is no gray area. Most importantly it leaves us with no asterisk situations like


So we have very clear and easy and FAIR rules for a tournament to happen within. I don;t think anyone would debate this, and am curious how the ninjas themselves would feel about it. 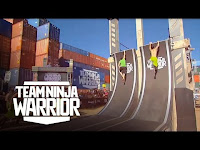 The last obstacle, how do they fit this into a 1-hour TV show? This takes the most thought but its not hard really, considering many episodes already have 12 races + showdown at a minimum but 16 races + showdown at most, we're really only talking about adding 2-6 races to a pool because the current existing tiebreaker matches would go away, no need for them. If adding 2-6 races is too much there are easy options from there that we don't think are too crazy:

a. extend TV time, the show does well on ratings, it could possibly justify it.

b. editing.  -   They run background pieces on every team and competitor, maybe don't do that and instead just let the announcers announce and talk about it during runs. OR just edit some runs down and do less reality show "here is whats coming next" stuff. They already edit some runs down as it is, and lets be honest, while people watch ANW for stories + competition, anyone watching TNW is pretty much watching for the pure competition. Just look at the amazing Race for an example, not every competitor needs a 3 minute backstory. Just do like modern sports and have the announcers talk competitors' backstory during the competition.

As Team Ninja Warrior grows, this is only going to become more of an issue as fans become connected to teams and their teams get "screwed" so take this opportunity now to adjust.
Posted by Allen Wedge at 12:34 PM No comments: