GBS at the Movies - 3: The Dale Earnhardt Story

Join us here for all the fun! I've never seen this movie, and I know nothing about Dale Earnhardt.

Since LSU/Missouri went to overtime, I'm backing the movie up by 15 minutes. When this clock says 9:15, I'm pressing play... See you soon!

Well, first of all, YouTube bootlegger man spared no expense or pixels when illegally uploading this one!

I'm gonna assume that this movie is to race nerds what that awful 2000 Beach Boys TV movie was for Beach Boys nerds. Produced by Uncle Jessie or not, it was BAD. 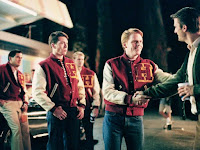 It ain't enough not to wreck. Gotta have a car won't quit on you too.

If we did shots for every time his dad has already said he wouldn't be a racer, this Blogathon would be over by now.

Hmmm... Super mean dad telling his son repeatedly that he will never amount to anything, further inspiring the son to prove him wrong and become the biggest star in his field... Wait! I think I accidentally put on that Beach Boys movie!

It feels like the years are going by so fast. Oh wait, it's cause they are! The dialogue in that last scene was like, "Hey." "Hey." "Got him to settle down?" "What about me? Do you need me?" One year later...

I like to think that JK Simmons improvised some of his lines here. He was like, "Hey, I know. What if I tell him right here that he'll never be a man, like I did in the last 13 scenes?" And the director was like, "Yeah! Perfect!"

The winner ain't the guy with the fastest car. It's just the one who refuses to lose. And if he has the fastest car, he can definitely refuse to lose. Cause his car will go really fast.

Son, they can't put it in you. And they can't take it out. I'm not gonna tell you what I think they're talking about in that scene.

Wait if the dad dies, who's gonna spread all this wisdom? Who's gonna tell him he's not a man?

OK, look. The first THIRD of this movie is baby and baby mama drama! Keep it in you pants, Dale!

How cool would it be if this whacky sidekick guy was actually Kramer instead?

SECOND PLACE IS JUST THE FIRST LOSER. He said it. In a movie full of cliches, they just said the biggest cliche of all time.

OK, I'm just gonna come out and ask it. How many calls do you think were placed to Matthew McConaughey to play this part before settling on Barry?

When he told his kid to drive around and come between him and the rail, he forgot to tell him he'd never be a man!

Somebody scan that QR code up there. I dare you.

Oh man! I knew I recognized this girl. She's the wife in The Santa Clause series, and she was in the recent Purge: Election Year movie.

We just skipped five years. And I don't even care.

Dude is Charles Manson in this Beach Boys movie, or what?

I know I'm being funny here, but I'm also kind of sad that they made this whole movie, and I feel like I'm learning nothing about this guy. I feel like he deserves an actual movie.

"Really? Have you done anything I've heard before?"

"Yeah! I played all the little guitar licks after every scene in this Dale Earnhardt movie!"

I swear I just don't understand Hollywood. Why is it so hard for them to make decent movies based on true stories?

Barry Pepper in Saving Private Ryan: "Be not that far from me, for trouble is near; O my strength, haste Thee to help me."

Oh man, you know what this movie needs?? Three Doors Down! Oh good, there it is. Perfect.

Well, thanks to SpeedGeek for helping out here. Honestly, as bad as this movie was, it was still way better than every other Blogathon movie, unless Blue Chips was a Blogathon movie of course. I'm gonna actually go read the true story now. Also, YouTube just auto-played something else called "Dale the Movie," which seems much better.
Posted by Mike at 9:15 PM

We may be watching a grainy YouTube posting of the movie, but I honestly don't think that a crisper picture or better sound would add anything to this experience. It was probably this grainy the first time it aired. And it probably all looked like this in real life. Just guessing.

A thing I did not know until watching this movie: attempting to support your family on $300 per week earned racing (and only that much if you win) is not a good idea.

I'm going to spoil this little bit of the future for you, Mike (and everybody else watching with us): Kerry Earnhardt (that'd be the kid that just left in the truck on his mom's lap, and NOT in any kind of safety seat) does not grow up to carry Dale Earnhardt's legacy of winning NASCAR races.

The obvious reason that Ralph is a better racer than Dale: Ralph uses the correct driving posture of keeping his elbows bent at about a 90 degree angle, while Dale drives with his arms straight out and elbows locked. You can't put any leverage on the wheel the way Dale's driving.

"It ain't the man with the fastest car, son...it's the one who refuses to lose...


Oh, but also, having the fastest car doesn't hurt much."

HEY! SOMEBODY SHOULD CALL THIS GUY THAT! THE....SCARE-ER.

"Dale! It is I...Humpy Wheeler. Of Charlotte Motor Speedway."

This is definitely how folks talked in the 1970s.

"Hey, jump in my truck. I'm Neil Bonnett. And I can't stop yelling things out when I'm deer hunting."

Also, there is zero chance Dale Earnhardt claimed he could see the air flowing off of other cars in the days he was running on short tracks. There would be no application for this, as the cars were roughly as aerodynamic as pallets of sheetrock.

There's also no way it's true cause I'm pretty sure he was checking out all the chicks in the audience to see which ones could make the most babies.

"Your daddy was a great racer, Dale...one of the best.

Unlike you. You're kind of a hack, who keeps bouncing off of things."

Also, Dale Junior apparently has been trained to look out for chicks for his daddy.

The little girl wanted NO part of the wingman position.

Confirmed: Suitcase Jake Elder invented upgraded suspension pieces! Nobody ever thought of doing that before 1978!

McConaughey: "Yeah, I read the script...I'm gonna need ALL of the proceeds of the movie. Not a percentage, ALL of it."

To be clear, there are some flagrant problems with timeline here. Dale drove for J.D. Stacy for literally four weeks. He did NOT marry Teresa Earnhardt during those four weeks. They got married like 16 months later than the movie just implied they did, after Dale ran part of a season for Richard Childress and an ENTIRE season for Bud Moore.

I hope that doesn't keep you up tonight.

Ha. As you were posting this, I was posting, "We just skipped five years. I don't even care."

I had to take a quick 10 minute pause to get a child off to bed, but I absolutely wanted to see the "Goodwrench unveil" scene. Again, timeline problems. The "kerosene rag around the ankles, so the ants won't eat they CANDY ASS" quote was supposedly just said in 1988. It was actually, and famously, said in 2000, after NASCAR made some changes in the name of safety, after two fatal on track accidents.

Basically, I think the screen writers wrote down every famous quote Dale ever said and then declared "WE GOTTA WORK ALL OF THESE IN SOMEHOW!"

By the way, because I know you'd want to know this, Dale Jr. is portrayed by a young Chad McCumbee. Who managed to work his way up the racing ladder, and even made a few NASCAR Cup starts from 2007-2010. I'm guessing he didn't get most of his rides because of his acting skills.

Now that I actually work in a mill, I am thrilled to get to threaten my kids with a "if you quit school, you gonna wind up like your daddy...workin' in The Mill!

Of course, I get paid pretty fair wages, with a fairly generous benefits package, a good, low deductible health plan and a great 401k match...I think maybe I'm muddling my message here...STAY IN SCHOOL AND STAY OUTTA THE MILL!!!"

Do you hear random guitar licks playing behind you in the mill?

They've referenced a bad wreck he was in. Did they show that? I feel like I missed it.

They showed a flashback to the wreck that he had at Talladega in 1996. It's weird how we hopped back in time there a few years, huh?

Also, there is a 0% chance Senior told Junior "I want you to start wearing one of them new harnesses", since Senior absolutely did not believe in new safety advancements. One of the reasons that he died in 2001 (SPOILER ALERT!) was because he wasn't wearing one, because he thought they didn't work...and that excessive safety measures made the sport less manly (hence the "kerosene rag" comment in 2000).

This movie has a LOT of problems. And not all of them are Mill-related.