GBS at the Movies - The Benchwarmers 2: Breaking Balls

To watch with us, you can load the film on Netflix. At exactly 9:00 EST, press play. Feel free to comment here with any thoughts.

Note: I saw Benchwarmers when it first came out. All I remember is Napoleon Dynamite, David Spade, and Rob Schneider being grown ass men playing against little league kids, I guess to get back at all the people who bullied them? I don't know, man. I assume it really doesn't matter.

Y'all, it took about 43 seconds for a baseball team name-related dirty joke! This is gonna be SOLID!

And a minute later, a fastball to the BALLS! This movie is going break new ground in baseball humor!

Oh Chris Klein. Poor guy. I feel like life has really hit HIM in the nuts and he's failing to realize the irony of this whole situation.

Holy moly. I guess the subtitle of BREAKING BALLS should've been a hint, but it's impossible to tell you how many balls/nuts jokes we've had in the first six minutes!

Iris Fletcher has seen better days herself. My man Chris Klein got hit in the balls really hard, but what's HER excuse?

Oh and this guy Lochlyn Munro. We've seen him in... movies... that I can't remember. But I'm sure of it!

Oh, they didn't really hire him to be a lawyer. They just wanted his baseball skills. Uh... we're stealing movie plots from King of Queens episodes now??

Hey guys. Do you get the metaphor? When life screws you, it's like getting hit in the nuts.

OK, full disclosure, I'm going through about 200 movies for the Munro guy, and I don't know any of them.

Guys... the only thing worse than all the balls/nuts jokes is when they try to talk like lawyers. And that's the only two choices we have here!

By the time we meet the players on the softball team, we've all been kicked in the nuts. Thanks God there are only five of them.

This first game reminds me of the time we signed up to play softball intramurals in college. We showed up for our first game, and our opponents were... the FOOTBALL team. The Conference USA champion football team with like seven future NFL players. I'm out there playing shortstop at night with one eye, and these guys were hitting the ball into the woods, which I'm pretty sure weren't even part of our campus.

How pathetic is it when you're watching a movie and thinking that a simple Napoleon Dynamite cameo would improve it by 1000 percent?

This love interest/intern/clerk/whatever is really struggling with the whole... acting thing.

Dead Man on Campus! That's where I know Munro from! 1998, represent! (Plus a killer soundtrack with Goldfinger, Self, Supergrass, Blur, and others!)

Oh God. Lovitz is telling the story of the first movie. Like it's Friday the 13th or something.

RE: SpeedGeek's comment about this team not winning a game in 20 years... THIS team has poor man's Serrano AND Crystal Lowe, who has gone from cheesy skin flicks to cheesy horror movies to cheesy Hallmark Christmas movies to... THIS.

OK, when he hits the light pole, and it just fizzes... that was good too.

RE: SpeedGeek's comment about teenage boys writing this movie... I once did a Toys for Tots drive with teenage boys, challenging each of them to bring in two toys. They started to bring in two balls each. Footballs, soccer balls, etc. Every day, it was, "I got TWO BALLS for you!" "Hey, here's my TWO BALLS!" "How many BALLS you got so far?" "How many BALLS you think we can bring?"

The dude going in to pinch run on his motor scooter seems... illegal.

In my mind, the dude who plays Jack is actually the little kid from Pet Sematary, Full House, and Kindergarten Cop. Come and get it, fun boys! 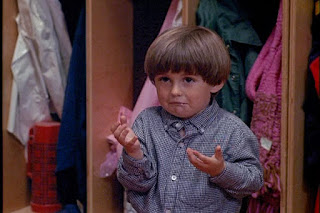 More references to the first film. Let it go, guys!

This intern/clerk girl just makes her own hours, coming and going as she please, like a ghost in the night.

How long until Klein finally suits up and plays?? There are only 17 minutes left.

I must admit, I thought Lovitz would be a lot worse here, but he's fine enough I guess. Still, the ONLY character that is actually watchable is his daughter. I'd watch a Part 3 if it's about her killing zombies and stuff.

We've had worse music in other movies for sure, but this music is still really awful.

And here comes KLEIN with the bat! In the last 10 minutes. I bet he gets hit in the balls!

Man, the old brawl on the field during the live ball move.

I just want to note that the kid in the movie and the Kindergarten Cop kid have the same last name (Hughes). Maybe they're related. I called it.

Wait, this is my dude Chris Klein! Who my wife and I once saw at a dive bar about a mile from our house in Omaha when we went there to watch a University of Nebraska football game. Good times!

Chris Klein AND Jon Lovitz!?!?!? Put Scott Pruett in this movie and it'll hit all of my favorites!

Gosh! I can't imagine what kind of plot points we've got to come after that first softball game!

Also, I just took like 10 minutes to read Lochlyn Munro's entire IMDB page, and I think the only things I might have seen him in were a single episode of the "Las Vegas" show from 2005 and maybe the one episode of "Blossom" he was on in 1994. This is saying something, because our dude WORKS (there are easily 250 credits on there).

To be fair, Mike, there are a LOT of folks struggling with the whole...acting...thing here.

This movie must have been written entirely by 13 year old boys who have never watched movies before.

Are we supposed to believe that in a non-infinite number of years that this softball team might lose a game by less than 20 runs?

OH! Klein is gonna find ways to play to everybody's strengths! Of which there are startlingly few! But that's the plan!

Just wait until Klein suits up and plays at the end!

OK, I did just legit laugh out loud at Klein turning around and finding that everybody in the theater but him was making out...

OK, and the "rockin'" version of "O Canada" while the hockey guy ran the bases made me smile. This movie is coming around. Or the DEEZ NUTS are starting to do work.

Ooh, the clerk/whatever being a former softball star was a plot twist I legit did not see coming.

Also, I've got an actual buzz right now. Did I mention that DEEZ NUTS is 8% ABV?

I kinda wish I had that Deez Nuts myself to make it through this.

(Sorry, I got a little behind.)

Golly. That movie had some problems. But nothing that some better writing and acting and less cliched yet clearly telegraphed plot points couldn't have fixed!

But, really. I'd rather watch that 10 times than watch "Crackerjack" again. But maybe that's the DEEZ NUTS talking.

No you're right. This felt more like a movie. Crackerjack was like a Golden Corral commercial on acid.

water pocket and a security pocket for your most valuable things. gym bag for men