IndyCar Notes, Rumors, Pictures and Video from the Weekend

I'm going to try and just keep this to the interactive, so here's the notes from IndyCar's weekend:

-I'm not sure if all were able to catch it but I really want to give a big thumbs up to VERSUS/IMS Productions and anyone involved with this past weeks show "IndyCar: Crashes & Conflicts"

With the possibilities endless to go with making crashes seem cool, or over dramatization of Danica incidents, that piece was probably one of the best I've seen done to truly explain how tension and danger are a part of the sport. We got new interviews about fights and track incidents but more importantly talk from drivers about their crashes. Truly this was a piece done to show the viewer the danger of the sport; not to glorify crashes; and a very big thumbs up for the extensive diagrams and interviews with Kenny Brack & Davey Hamilton.

-Also on the subject of VERSUS; a huge thumbs up for their web guys. I'm sure they already planned doing it; but they did exactly as we hoped they would and turned the IndyCar page into a video, news and more page. 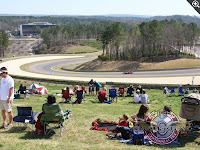 -Now on to the testing at Barber Motorsports Park. This first thing and biggest news to come out of the test is how clear Barber and the state of Alabama is making it that they want a race, and are willing to do what it takes to make that happen. They turned out 7000 paying attendees Saturday and 10,000 Sunday.... FOR TESTING. I mean shoot, that # dwarfs the 100 fans I saw at Sonoma on TV last season.

In addition to that, Barber is easily one of the prettiest tracks I've seen, along with most every other southern venue I've seen; they take serious pride in keeping things beautiful, scenic and clean. They don't just bulldoze and lay down the concrete; the track is surrounded by beautiful gardens, trees and trimmed bushes. The concept also reminds me of the University of Lafayette Ragin' Cajun Football Stadium, where the field (or in this case, track) is situated as a bowl, meaning fans can sit on a elevated hill and look down into the stadium/track with just their picnic blanket.

They've stated many times in the media they want a race and tried to get one for 2009; and continue to do so:

If you'd like to see pictures from the testing so far, head: here / here / and here and first here is some video of the Indy Lights Series cars; taken by digitalmaddog:

and then here is either Will Power or Ryan Briscoe making a nice pass:

-Of the cars to note at the test; I'm not sure if the cars simply haven't been painted since 2008 and have changed what kind of course they 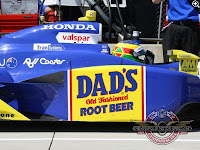 are set up for, if they are backups, or what but Mike Conway was racing the blue/yellow 'Dad's Root Beer' livery we saw on the DRR car last Chicagoland (much approved); and Justin Wilson at Coyne was driving the #18 Sonny's BBQ car; not the Z-line Designs that it mimicked in Homestead.

-Lastly, Milka Duno did not participate as a member of the Newman-Haas-Lanigan team. That is all we know for certain; nothing official has been said; which brings me to the following notes...

-According to just about anybody who feels like writing without sources; word on the street is that something has happened with Milka's sponsorship she was bringing along; no check has arrived and as such she may be out of their ride.

-Word from Curt Cavin and a few others is that Rubicon Race Team (previously said to have a good deal of sponsorship) is meeting Monday to decide their 2009 season. What that means no one knows; but at this point you have to imagine anything is a possibility.

--And to a final bit of interesting news. Now that the Sebring 12 Hours is over; Audi and Peugeot are out of ALMS for the rest of 2009. We knew this was coming; but what Robin Miller reported Sunday night was that Honda/Acura has no desire to compete against no one in a sports car series.

As such the word is that both the Patron Tequila/Scott Sharp Racing Team & Gil De Ferran racing teams will be coming out of ALMS and moving to the IndyCar Series. While it is of course only a rumor; I know many fans would love to see Scott Sharp and the awesome Patron Tequila party back at race tracks as well as seeing Gil De Ferran (even if just as a car owner).

What makes the De Ferran part more interesting; is that is continues the quote from Europe about Takuma Sato (former Formula One Driver) looking to come and drive in IndyCars. I would personally love to see Sato in ICS; great personality, great driver; and for anyone unfamiliar, all you need to know is not only was he a good driver in F1; but he has also driven around the Twin Ring Motegi oval before... in fact he did it in a Formula One car!

Barber looks great, though I can see why the drivers want more run-off.

That Sato video was brilliant! Great to hear the V10 again too, I miss those.