A Look at IndyCar's Weekend in St. Petersburg

What a great weekend to start the 2009 IndyCar Season! Rather than wax poetic, lets just get right into our notes from the weekend: 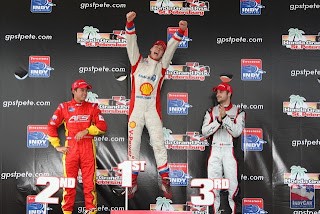 -Only one ‘Junior’ has won this year and it wasn’t the one making all the dough. Congratulations to Junior Strous, and car owner Paul Diatlovich, for winning not one, but both of the Indy Lights races in St. Petersburg. Neither win come by fruition of a pole position or superior car; but they do definitely give him a pretty substantial 28 point lead over 2nd place Jonathan Summerton and 3rd place James Hinchcliffe. 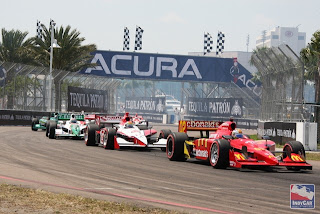 -There were two key overtones this race weekend; one we’ll get to later; but the second most notable thing… parity at last! Congrats to Ryan Briscoe and Team Penske, slightly familiar for sure but.... while there are many races to go, including the aerodynamic ovals; take this in for a second: The IndyCar Top 10 included 9 different teams! Some of it was a result of on-track incidents, but it was pretty clear that more than even 7-8 non-Big 3 drivers are serious contenders on, at least, the road courses.

-No timed races! The official time of the race was 2:12:01. What does that mean? That means had this run through ABC/ESPN the race would have ended somewhere near the 70-80 lap mark instead of the full 100. Just another reason to shake VERSUS’ hand. 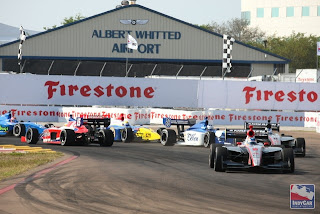 -Sunday’s track action was certainly a change from Friday and Saturday. I’m not sure if it was the heat and humidity; or simply pent up aggression, after a long off-season, but there was certainly a lot more sliding & colliding in Indy Lights and IndyCar both on Sunday. Saturday’s Lights race saw only 2 caution flags for a total of 6 laps while Sunday’s race had 6 cautions over 18 laps. The trend continued in IndyCar with 7 cautions over 28 laps.

There were certainly more ‘marbles’ on the course than usual which was most attributed to the brutal heat/humidity; but there were also some curious moves by some very antsy drivers; to which we can only say to IndyCar: start the season sooner so these guys don’t get so bottled up! 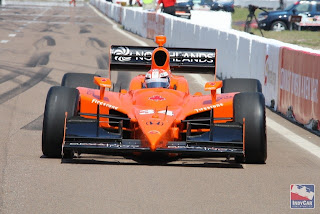 Some incidents can easily be chalked up to “racing incidents” like the first turn melee; and some might even be able to justify Matos’ attempt on Danica, even if it was too late in the turn; but I just don’t know what Alex Tagliani thought he saw when he booted Marco Andretti in the late race incident.

-Robert Doornobs recovered from an earlier tangle suspension problem, to pass Stanton Barrett on the final lap to take the Rookie of the Year points lead. Yes that’s how crazy drivers got. Slow, steady and learning Stanton Barrett managed to finish two spots outside of the Top 10 simply by finishing! To all those aggressive guys out there, the energy and aggressiveness is great but remember, in order to finish first; first you must finish.

-For those who missed the post race interviews, Darren Manning finished the race on a flat tire!? Please note that Darren did not finish last in the running order. That is to say, Darren held off Vitor Meira with a flat tire; how’s that for sticking it to the team that let you go? We can only hope that Darren, arguably the funniest driver in IndyCar since Bryan Herta, can turn that Top 10 into another race, and another race, and another…

-Speaking of post-race, lets get to what was clearly the star of the show on Saturday and Sunday. VERSUS has, in one race, become a contender for the best motorsports coverage, period.

We got the appropriate amount of pre-qualifying & post qualifying coverage; 45 minutes of pre-race and 20 minutes of post race for an already overtime race. Not too much that it got boring (See NASCAR’s over 4 hours of pre-race), and not too little that we begged for more. I counted post-race driver interviews all the way down to 8th place; and those weren't a rushed quick comment type either.

The crew on the microphones hit maybe one or two snags here and there working out some audio bugs, but overall it was Grade A work, from the great discussions between Buhl and Beekhus or from Jenkins being comfortable enough to let the technical experts be the experts yet expressing the excitement of the action, to the ‘new’ pit crew proving to everyone that they have the chops to do those jobs even if the internet hadn’t “heard” of them before.

The video itself was stunning, in a better HD format than I’ve seen any other racing done; and they did the one thing so many people can’t figure out; they covered ALL the action of a road course race from all the angles that made sense and really got the sense of the action across to the viewer. Reportedly VERSUS brought somewhere near 21 cameras to cover St. Pete; and they used them all extremely well, with shots lower and in spots I’d never seen before from ABC/ESPN; my particular favorite was the flyover shots that followed the field. I don’t think there was a track incident that didn’t have a camera on it, and most action had 2 and 3 angles. 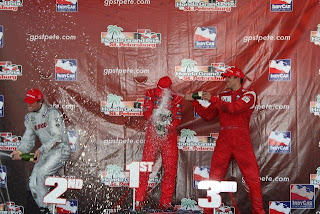 The general best part of the coverage is that from the cameramen, to producers, to the announcers; everyone with VERSUS is genuinely excited to be covering races, and it shows. Versus president Jamie Davis was actually on hand and had this and much more to say:


"When I walk around, watching the excitement and passion the fans have for the sport, it gets my adrenaline going to want to jump even higher and go even deeper to really give (the series) coverage like it's never seen before, that's why I think it's only the beginning because as we start doing this I think the fan base will continue to grow more and more, and as it grows that will get us going even faster to build that enthusiasm."

IndyCar Series and fans… congratulations you have a great partner.


Pictures by indycar.com
Posted by Allen Wedge at 11:59 PM