Paint Schemes and Posturing at IMS

Firstly: Before we get to all the wonderfulness at Indianapolis Motor Speedway; I just wanted to do a followup to our, now yearlong, coverage of the A1GP's progress, or lack thereof. So A1GP in the 2008-09 season went from 11 races to 7, started with half its teams, almost lost the cars themselves, supposedly lost some financial backing, but did gain the historic Surfer's Paradise date from the IndyCar Series on Australia's Gold Coast.

As you can imagine, Queensland Australia can not be too ecstatic about their decision to not work something out with IndyCar with the shakiness and repeated troubles and cancellations that befell A1GP in the following 6 months since the decision. They did manage to secure some new sponsors after losing the IndyCar related ones, and they changed the name from 'Indy Gold Coast' to SuperGP (combining V8 Supercars and A1GP); but still, one can't be happy about seeing A1GP struggle to exist while IndyCar is thinking about adding Brazil and China in your absence.

Well at least in word, Queensland has gotten a nudge, nudge ok guarantee from A1GP that they will definitely show up the next 2 years. I'm not sure what the stipulations allow them to make this guarantee to Queensland, and its odd that it comes as Mike Bruce reports:

"on the same day a stinging motorsport editorial in New Zealand media cast serious doubts over A1 even reaching its fifth season -- to be kicked off with the Surfers event in late October.

Motorsport journalist Eric Thompson told The Bulletin he would be surprised to see A1 make it into the 2009-10 race year after sponsorship woes, failing teams and canceled races."

So will they make it? Who knows? If they do fail do they try to get IndyCars back? I'm hoping A1GP does answer the bell; the series concept is great even if its not being successfully executed, but they really need to get their season set and stick to a plan, rather than the change as we go craziness... Guess its can really only be wait till October to see...

Now for the notes from IMS practice for the Indianapolis 500:

One great thing about the IndyCar Series is the large amount of teams, drivers, bloggers, writers joining social networking via Facebook and especially twitter. We can now welcome Tony Kanaan, Marco Andretti, Stanton Barrett, Sarah fisher and more to the show. (check out our twitter account and who we follow to get a whole listing of everyone)

-Stanton Barrett specifically is giving us a look at what it is like to do things as a very understaffed, under budget, underdog. He's twittering through IndyCarNation and also doing a little blogging. He hasn't blogged on Interush since Kansas, so maybe its a switch, or...

We've learned that it seems Team 3G has lost their sponsor, but not which one, I really hope its not Interush, as they were sponsoring both Barrett and Roger Yasukawa later in the season; and it was their colors that made the car look so bad ass. I haven't seen the car at IMS yet, but reportedly its running with all of the decals gone and simply a #98 on the wing. Very unfortunate for this up and coming team. Stanton let us know that Greg Beck is meeting with an energy drink today about sponsorship so wish them luck. (and yes itf they get it that would be the 3rd or 4th energy drink, and no Monster or Red Bull to be found.)

UPDATE: Ouch; not sure who in fact is the bailing sponsor, but Interush is no longer the headliner (now on engine cowling only) as the car on the track looks nothing like the white/bright blue scheme we saw in weeks 1-3. Stanton is now running in a black and red decal-less car. If they did leave we may have just lost the #2 paint livery in the series; here's wishing Team 3G luck with the sponsorship.

-Another thing we learned is that Paul Tracy is making sure everyone understands that while he hasn't been to IMS since the controversial 2002 race, and hasn't driven full time in almost 2 years, he didn't forget anything. He came out and busted up a 219mph on just his fourth lap and also put down the fast lap of the day; in what was most likely just message sending to about everyone. His paint scheme however is still so-so; its better than the original sketch, but come on man spice it up like you spice up all your PR.

-More fun with drivers... Raphael Matos is hella competitive as we learned from his blog:

"Today they had all the rookies ride in a pace car with Rick Mears. He took us around, showing us the line and talking about what's important to remember there. It was very helpful, but I didn't ask any questions. There were all the other guys in the car, I didn't want to let them hear the questions I had."

Honestly its cool to see the competitiveness is there in a rookie, we have the full gamut in the ROY race: Matos ran the track but never in ICS; Doornbos, Conway and Stanton are oval rookies with distinctly different backgrounds & teams; Philippe has road experience and a win to his name but I believe was out of a car for a year and Tagliani has a 10 year resume without a race at IMS surprisingly.

Speaking of Tags, I liked the orange look that resembled the 2006 Panther Racing, but they definitely can't go wrong with a good Black/White look with King tut on the cockpit. In fact its interesting to see Lifelock is on that car, because we know Rubicon Race Team's ride for Buddy Rice fell apart when they lost a big sponsor. Lifelock was their big sponsor last year, and if they are back, it makes you wonder who the sponsor is that they lost. 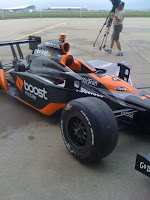 -Danica has gone the way of Halloween with Boost Mobil (whose phones are made by Motorola); and from all her comments, it looks like shes hoping some of the mojo from Dario's orange and black paint will rub off on her.

-Panther Racing is going full on support for the National Guard, with camo! But I just feel the car is a ginormous step back from one of the only good looking red, white, blue cars on the track. Its unique for sure, its patriotic definitely, but not so sure on the attractiveness scale. Maybe they are hoping this will disguise the car so they can sneak up on people. Come to think of it, has anyone ever painted their car to look like the pavement? 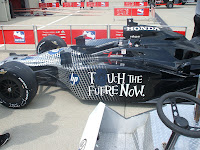 -As previously noted, Davey Hamilton's car this year, is a serious step up! And while you can't read the HP slogan while the car is in motion, it still looks sweet; and for many who may not have thought of it; Hamilton in at DRR is great for Mike Conway. 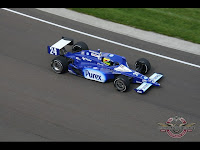 -That is definitely someone Conway can learn from, and someone to learn from is what he needs. Conway who ran the Mini-Marathon for the first time on the track, gets a great refreshing look for his car, pun intended. But seriously, its absolutely great to see Purex reunited with the DRR team, a look so familiar from their days with Robbie Buhl as their driver. 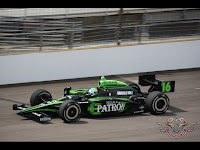 -As expected, Scott Sharp's #16 Patron Tequila car is bad ass! But could we really expect any less? Is there even anything else to say about it? It surely won't be mistaken for Viso, or anyone else in the field, its sleek looking and readable. Scott was already running good speed yesterday, so it looks like he'll be a first day contender, and that's good to see. In fact the more we see times, the more I think this may be one of the tightest fields in a good long while.

-Rookie Nelson Philippe has a very interesting and surely unique look. They are sponsored by an eco-friendly, reduce your carbon footprint movement. Hence the car has gone with the supposedly unlucky #00 to symbolize zero carbon footprint. That is, a racecar, is being used to tell people to reduce our carbon footprint. Yes I realize they burn ethanol and not gasoline, and I know there are more specifics to it, and marketing is marketing; but it just seems a little ironic. Very good paint scheme though! 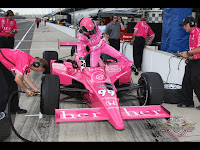 -And finally we need to give some seriously mad props to Sam Schmidt Motorsports/Chip Ganassi Racxing & Alex Lloyd for bringing us easily a Top 3 paint livery with new sponsor 'her' which I believe is an energy drink. No matter what it is, that car is stunningly awesome, definitely unique, and not ugly in the slightest. Yes Alex, real men wear Pink, but real badasses do it in a racecar at 220+ mph! I'm still not sure if its better than the Matos livery, but it is surely #2 or #3 on the grid right now.

Back to practice for the day, check us out on Twitter for more current updates! 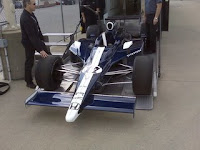 UPDATE: As we've said before in the past, we have no idea what Rahal Letterman Racing plans to do, or how they operate; but one thing we know for sure, is that they never disappoint in the paint scheme department. A throwback to a Dan Gurney/ Eagle is one heck of a look for the #17.

Another Update: we now have word from the Columbus Dispatch that Oriol Servia is the driver of the RLR #17. It will be a 2nd week program, and DAFCA software is the sponsor.

Holy smokes. The Eagle throwback painjob just about made me spit out my coffee this morning. I will buy a hat for that team, at any price. Bobby, let me give you this blank check. Now, please come back for the rest of the season.