Filling in the Blanks: ____ Jackson Has Sprained MCL 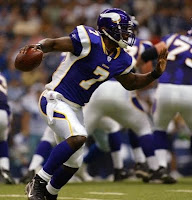 This is what I saw, when looking at news headlines on my cell phone last night. I don't have a fancy i-phone or a fast internet connection. It barely shows pictures most of the time. But I can read e-mail and keep up with scores. But every now and then, when dealing with mostly text, I'll come across something like this.

So I had to decide if I really wanted to click this link and take a 2-minute detour away from checking my twitter account. I quickly went through all possibilities in my mind to decide if any were important enough to care about. Here is my list of Jacksons and my reaction to the idea of each having an injured knee.

Michael Jackson?? Maybe he's not dead and it was just a sprained MCL! Silly doctors.

Steven Jackson?? Crap, I have him in my keeper league. This could be serious.

Darrell Jackson?? Does he still play? What team is he on? If he sprained his MCL, would anyone really notice?

Bo Jackson?? Bo knows knee injuries, but I don't think it's really news-worthy anymore. But have you seen this Tecmo Bowl video?? No sprained MCLs here:

Or how about this video with real highlights:

Desean Jackson?? Eh... not on my fantasy team.

Edwin Jackson?? I actually just dropped him from my fantasy baseball team.

Phil Jackson?? Who knows what this crazy dude does in the off-season. Could be a surfing accident or something.

Of course, I thought of all of these guys and not the actual Jackson with the sprained MCL: Minnesota QB Tavaris, of course. In the end, I clicked the link, based solely on the idea that it could've been Steven Jackson, star RB of my fantasy football team.

Feel free to post your possible Jacksons (and your reaction to his or her hypothetically sprained MCL) in the comments.
Posted by Mike at 3:59 PM