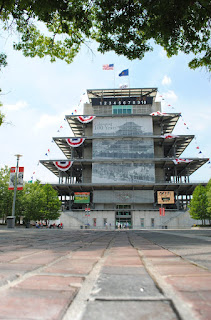 So it’s my first time in Indy and it’s been nothing short of everything I’ve been told it would be. And while I could wax poetic about tenderloins, the smell of ethanol, the sound and sights of racing, the awesome vintage cars that were on the track today, the great  (and cheap) museum… but oddly enough, the thing that stands out the most from the track experience thus far… Shirts are not required, and apparently highly frowned upon once your belly reaches a certain level of hanging-over-your-belt-ness.

But exposed bellys aside, it’s just over 30 hours away from the race (and likely less so when you’re reading this as I’m writing it at 2:00 a.m.) so let’s get to the most definitely important things.

Indy 500 Predictions Guaranteed! (To be wrong) or your money back. Take these to Vegas my friends, from what I’ve seen at the track thus far, this is what I’ve been able to learn:

First Car Out: Now… Sebastian Saavedra is in a barely put back together car, he’s green, and he even spun coming into his put twice today during practice (once dinging up the nose), he’s very young (19.. gee what were you doing when you were 19) and that’s why many people have tagged him as the contender to make his exit first. And that is why it’s wrong, it’s TOO predictable, so much so that it’s on Sebastian’s mind, he knows he needs to be cautious, and that is why the first car out will be… Ana Beatriz. I like Ana and hope she proves me wrong, but there’s a Ton of aggression there, plus she’s going to watch Tomas pass 17 cars on the first lap and then try to replicate it herself , nothing has really gone wrong yet for her which is almost the perfect storm for a rookie or better yet…

Second Car Out: Bertrand Baguette. I have no reasoning against Bertrand specifically, but we all know that having 2 true rookies lined up behind one another has never worked out to the best percentages, and he is right behind Ana and right in front of teammate Mario Romancini and surrounded by Danica “Bad Start” Patrick, that’s not a recipe for healthy containment.

Who Leads most laps: Oh of all the things I’ve seen this is the easiest one to do let’s see here according to time sheets during various weather conditions (i.e. putting Ganassi and Penske names in a hat and pulling one out) it’s totally going to be Scott Dixon. You know, lets better serve this time by looking at some of the cool antique cars that were going around the track on Carb Day.

# of leaders: While Penske/Ganassi will take the most, there will be a lot of pit strategy giving us 9 different leaders, one of which will be a rookie.

First red car out: Does it really matter, aren’t they all really the same? I’d have to go with Briscoe, simply based on the fact that of all the Ganassi/Penske guys, he’s the least robotic and the most emotional at the wheel... hey look, more vintage cars!

First celebrity shown on TV: There’s a huge push to let everyone know Marky Mark is going to be there and in the 2-seater at the start, but look for Robin Roberts (pace car driver) to be the first shown on TV with a wave at the camera.

First “celebrity” with attention brought to: This is one of those times when they put someone up on TV and Marty has to explain to us why that person is on the screen and it’s simple... “Hey there’s that Rupert guy who was on that season of Survivor once, remember that.”

Most cars passed in first 2 laps: Everyone seems to be pointing at Kanaan doing a number like 10 passes on the first lap, but I think many are forgetting two things. Kanaan wants to win the race and he knows its 200 laps long, but he’s still using a barely tested car… Tomas Scheckter on the other hand just wants to pass as many cars as possible at any time (as evidenced by his traffic citations last night) not to mention I think he did more passing in the 30 minutes of Carb Day practice he did, than the entire field of cars did at Barber; which is why you should look for Tomas to post more passes in the first 2 laps than TK.

First 'significant other' shown: the race for the most times shown will be contended between Ashley Judd and Emma Dixon with Ashley getting the slight lead at the end of the day, but neither will be first… because that privilege will be given to the entire Castroneves clan who will be shown huddled together at all times, even before the drivers get called to the grid; that how the Castroneves’ family combines their power and transmit it to Helio, giving him the ability to levitate.

How many starts are waved off: Everyone is all up in arms this year about being 3-wide at the start, but if you watched the Indy Lights race today, this answer is easy as counting the black flags given over this season for bad driving…0.

First car Marty Reid will incorrectly identify: This is THE hardest prediction to make of the year because the Penske cars now have different colored endplates which help Marty out. Which is why the honor is going to Mario Moraes… who Marty will confuse with Paul Tracy.

First Marty-ism of the race: “Ooooo, whoa… Bert---on Bagettes got a little squirrely there”  Only he will actually have been watching Mario Romancini… from a taped practice session… with the words “earlier this month” on the screen.

First pit mis-cue of the race: You want to know why roger Penske was mad when he heard pit selection would be done by initial times and not in the final 9 showdown when he was going to wait to have Helio bust out a 228mpg lap on everyone. Its because he knows what the first pit stall means. That's why on Thursday when other teams are tinkering with the cars, his team is doing full on pit stops in the garage area.

That can't be said for Conquest, who I personally witnessed attempt at least 5 full in-out pitstops on Carb Day and each time the team being visibly angry afterward... one time to the point of throwing down equipment. I really don't have a full idea what was going on (though reportedly from twitter it sounded like one time they missed a wheel-nut)... I'm no Nostradamus but that doesn't seem to bode well for once the actual real race pressure comes on.

Root beer of the race? This isn’t really a prediction, but I’m a big root beer guy, and I need to know if Indianapolis/Speedway has any good root beer from the local area, I’d like to try it out and make it the Root Beer of the race.

Rookie of the Year: Simona de Silvestro will surprise no one by taking this honor on Sunday… it will turn a few heads however when she leads 11 laps. And no, Marty will not get her name wrong anymore, that one is etched in his brain now because surely by this point he’s caught on to the fact that’s she’s the new favorite female around the track…and… that gives him the opportunity to turn any conversation about Simona into one about Danica.

Biggest Mover of the Race: Bruno Junquiera, he will lead laps, he will contend, and may even win. Seriously, could anyone be more impressive in as little track time… Bruno will then go back to racing in Brazil for the next 340 days returning to Indy again on bump day this time without even shaking down a car, instead going straight to a qualifying run just as they finish bolting the engine in… he will put that car on the grid as the fastest that day as well.

Dark horse: If it weren’t for the fact that I made this prediction last week, I’d go with Bruno; he’s easily been the most impressive driver this “month.” But I’m sticking with my guns, and am telling you to watch out for the power of awesome Root Beer and red hair… a combination that has already cause Mike’s display car to catch fire.

Winner: While this is the only question many of you are interested in, it’s almost the least fun to pick. Unless something catastrophic happens, you need to remember Penske now has THREE cars in this race, that means he can go as far as three different strategies if he needs to. And that’s why I’m going with…. Scott Dixon. The Iceman will return, and he may even crack out some emotion… but if I’m picking a non Penske/Ganassi, my thought actually goes to a guy who always performs worlds better at Indy than anywhere else Marco Andretti.

But here’s the most important thing… what are your predictions? Let us know, get that stuff on record, right here, right now; lay down the gauntlet so that you can come back and say “told ya so!”
Posted by Allen Wedge at 3:06 AM