Being a Cubs fan is a tough job. It's bad enough that we have to watch this team lose so often, but we also have to sit around and watch "future hall-of-famers" head to the disabled list, the bench, the minor leagues, and/or other teams. In fact, we could field an entire roster with players who were supposed to be stars at their respective positions and didn't quite pan out just in the last 10 years. The starting line-up would look something like this: 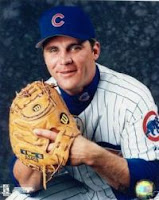 After he hit 24 HRs two years in a row for the Dodgers, the Cubs brought in the son of former Cub great Randy Hundley to answer all of our catching problems. Maybe the steroids wore off (Hundley was named as a user in the Mitchell Report) but he managed just 28 HRs total in his two years in Chicago. Even worse were his batting average (around .200) and his OBP (under .300).

Who needed Mark Grace? Choi was the new Mark Grace. He was the power-hitting, Asian Mark Grace. I even raved to my friends about the homerun I saw him hit over the pool in right field when he was an Iowa Cub playing against my hometown New Orleans Zephyrs. Unfortunately, Choi's minor league heroics did not translate to the Major Leagues, where he only hit 40 HRs and 120 RBIs in his career. Of course, most of that is the Marlins' problem since they gave us Derrek Lee for Choi back in 2004. (By comparison, Lee hit 78 HRs and 205 RBIs in the two years following the trade.) One of the few times we've successfully sold high on a prospect that didn't reach his potential. Speaking of which...

After the Cubs drafted Hill in the 2nd round in 2002, all we heard was how great he was going to be. He would soon be our starter at 2B and would be there for years to come! Like Choi, I made sure I got to see him play for Iowa a few times. He was going to steal bases and drive in runs. He was the next Sandberg! So you can imagine that fans were reluctant to embrace the trade that sent him to Pittsburgh in the Aramis Ramirez deal. Good thing Aramis has hit about 280 HRs while Hill knocked out 6 in his short Major League career.

Am I stupid, or what? Everyone knows Miles is a second baseman. Well, here's the deal. Our team thought it was a great idea to let Mark DeRosa get away before last season. Why? Oh, because we could sign Aaron Miles instead. DeRosa hit 21 HRs and 87 RBIs in 2008. While those were great numbers, they were even more important because DeRosa provided insurance at 3B. Sure enough, when Aramis Ramirez missed half of last season, instead of DeRosa's 23 HRs, 78 RBIs and his ability to play 3B, we had Miles's 0 HRs and 5 RBIs, along with his .185 average. But hey... he was a switch-hitter!

I remember the day we traded for Nomar. He had hit over .370 one year. He had once hit 35 HRs. He was mentioned with A-Rod and Jeter whenever anyone talked about the game's best shortstops. Of course, in a Cubs uniform, he couldn't even stay healthy for half a season and was never the same. Some people blame steroids. Others blame a more likely cause: the Cubs.

OK, so everyone knew what to expect from Milton Bradley. And even as he was imploding, we still thought he could get it together. The biggest mystery now is how we got the Mariners to take him from us for Carlos Silva!

Pie, on the other hand, was a five-tool player! Remember? We wouldn't trade him for anything. You could've offered us the Yankees' starting line-up and Jim Hendry would've rejected that. But then we found out his five tools were like striking out and maybe chewing bubble gum or something. In the end, we got a couple of minor leaguers for him as the next Sammy Sosa turned out to be the next Corey Patterson.

And then there's Fukudome. When we signed Kosuke, we were told he had 30/100 potential. We just didn't know those numbers would be 3-year totals! (After 2.5 seasons, he's totaled 29/138.) He's not a bad player and seems to be a great teammate. But the Cubs are paying him the salary of a Major League All-Star and he isn't even good enough to start on a pretty bad team. Instead he is in a platoon with Xavier Nady in the FOURTH outfield position. Meanwhile, Sam Fuld and Micah Hoffpauir remain in Iowa. 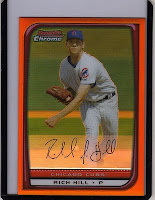 After saving about 100 games for Florida in three years, Alfonseca blew 9 saves for the Cubs in 2002 while saving only 19. Removed from the closer role in 2003, he posted an ERA near 6... which is the number of fingers he has on each hand! Sometimes, kids, 12 fingers just aren't enough.

I like Lou and I've enjoyed his grumpy grandpa attitude as much as anyone. But zero playoff wins in four years didn't quite cut it. Dusty Baker may have ruined Mark Prior's arm and all, but at least I was having playoff parties at my house where we all had toothpicks in our mouths. Hopefully Girardi or Sandberg can lead us back... 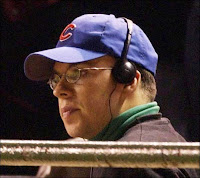 Of course, everything on this list and everything bad that has ever happened to the Cubs is this man's fault. Don't forget that.
Posted by Mike at 9:07 PM

Ron,
You should know that this column made me throw up in my mouth 12 times. Thanks for the ruined lunch hour.

Uh huh. What about the fact that the Phillies were open to trading J.A. Happ, wanted Ted Lilly, and we didn't make that deal happen? Instead we're gonna end up with some AA dude from Minnesota or something.

Sorry if I just ruined dessert.

I'd still have to put Soriano on this list. He has missed too many basic fly balls in his life.