So Who Does the BCS Blame When it’s Out of Excuses?

When it comes to the Bowl Championship Series, unless you talk to the handful of people who run it or the handful more who benefit from it, you will find nothing but disdain, anger and confusion regarding it. It’s not a debated issue, ask anyone if they think the BCS is the best we can do for determining a national champion in Division I-A football and you will get a 100% consensus that it is not. In the twelve seasons of its existence, the system designed (and repeatedly redesigned) for the sole purpose of giving us a National Champion has only produced two completely controversy-less championship match-ups, a 17% success rate.

Grab Bag Sports is no stranger to dissecting the BCS and its committee’s unproven excuses, but as part-time bloggers, we’ve never had the resources to research in more depth than online stats and databases. 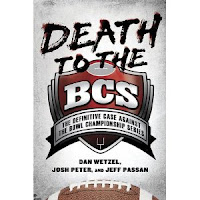 So upon learning that Dan Wetzel, Josh Peter and Jeff Passan spent two years doing the hard research, over 100 interviews and more to get the cold hard facts behind the BCS excuses, its history behind the scenes and financial standing, I was practically salivating. Their findings, Death to the BCS: The Definitive Case Against the Bowl Championship Series, does not disappoint.

Death to the BCS is a must read for anyone who considers themselves a fan of college football in any way shape or form. They manage to tackle every argument, claim and excuse that BCS committee members (noted as ‘the cartel’ by Wetzel, Peter and Passan) have argued as reasoning that we can’t have a playoff. Academic fallout, decreased economic impact, decreased regular season importance, the death knell for traditional bowl games, playoff selection controversy; there isn’t a single anti-playoff argument that isn’t struck down or corrected with facts, research and studies. The approach used alone is why it puts to shame the likes of Rece Davis, Mark May or any other proponent of the BCS.

Wetzel, Peter and Passan don’t stop with simply putting the anti-playoff claims in their place, the real juice of their work comes from interviews with athletic directors, coaches and, most of all, results of FOIA (Freedom of Information Act) requests to obtain the financial statements of the current bowl games, possible because, unknown to many, most bowl games operate as tax-exempt non-profits.

As someone whose family lost everything in Hurricane Katrina, one factoid really hit close to home for me:


“The Sugar Bowl received $3 million in direct funding from the Louisiana state government, according to its 2008 tax filing; brought in $34.1 million in revenue. The Sugar Bowl gave nothing. Not a buck to the Hurricane Katrina reconstruction effort. Not a dime to New Orleans after school program. Not a penny to Habitat for Humanity. It hogged everything, including the $3 million in taxpayer’s money.”

The millions pocketed or wasted (those are really their only options) by BCS Bowl Game staff aren’t the only facts to be damning. The shocking discovery, likely to many football fans, is to learn the truth behind all Bowl games financial stability and burden. The numbers prove most bowl games usually end in a HUGE loss for the schools sending their teams to play. Losses in the hundreds of thousands, losses after the so called bowl game payouts (sometimes negotiated away from the teams in order for the privilege to play). And that’s not exclusive to the Boudreaux’s Butt Paste Bowl, once the University of Florida split its payout amongst its conference, pays all the team/band/cheerleader travel, coach and AD bonuses and lodging for the National Championship game it stood to gain a measly $47,000… for the National Championship.

Then there's the mind-numbing... baffling discovery found in the straight admission by members of the Harris Interactive poll that they didn’t even watch a single game of the University of Utah before they trounced Alabama in the 2008 Sugar Bowl. Yet these same people who don’t even watch the teams are controlling those same teams destiny.

Interestingly enough, Wetzel, Peter and Passan provide a solution that is eerie in its stark similarly to the solution produced here at GBS just short of a year ago. Great minds think alike I believe they say; but that one difference between our proposed solutions (home games versus neutral sites for quarter and semifinals) while debatable on the surface is plenty convincing once you take a look at the money required to have a game at a neutral field vs. sensibly funneling revenue straight into the colleges/conferences that host them.

By this point the questions don’t lie with debaters like us or the likes of Wetzel, Peter and Passan anymore, but instead for the BCS. Definitive proof is now supplied for general public consumption proving that none of their excuses hold any water. With possible litigation coming not only from anti-trust lawsuits but now also possibly the IRS, how will they attempt explaining that because we may complain about the occasional paper cut in a playoff, they’ll continue to punch us in the face instead?

Who/What do the BCS ‘cartel’ blame now for its greed?
Posted by Allen Wedge at 12:47 AM