Will Power Has Already Won

Before we get into it, let me just say this; Dear:  Hyatt Place Downtown Seattle... I think it is considered false advertising when the word "Downtown" is in the name of your hotel and yet I'm looking at the skyline of downtown Seattle from the distance out of my window... just saying... "Hyatt Metropolitan General Area" might be a little more appropriate... but anyways... 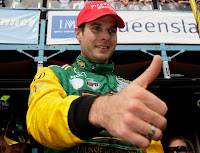 But even if you stand back for a second from the points battle, who will win, how awesome it is the series has had so many tight battles, and the fact that Dario could easily be building the best resume of any driver in the past 15 years... there is this:

One year ago, Will Power was in a back brace and we didn't know if he'd ever walk, let alone drive competitively again. Two years ago Will was dropped out of KV Racing Technology's roster because Aussie Vinyeards dropped their sponsorship of him when the Surfer's Paradise race was dropped (or at least that's what was claimed as reasoning).

Two and a half years ago when Will Power got his first lap around Indianapolis Motor Speedway, he responded by saying exactly "How in the heck do people go flat out around this track?"

For even if Will Power does win the championship this weekend at Homestead/Miami Speedway; he's already done one thing; he's proven to many young kids out there, to many aspiring young drivers, and even to current drivers overcoming injury like Mike Conway that overcoming adversity is entirely possible. Excelling after hitting the lowest of lows (from losing sponsors or losing the ability to stand) should still be shot for and aspired to; because if you put your heart into it, you can accomplish great things, and working VERY hard can reap wonderful rewards.

Will Power is already a winner, this weekend he's just trying to add another trophy to his shelf.

Great post - but what a bummer of an event Miami ended up for him. His story is still inspirational though, good call!