There are two ways to do this 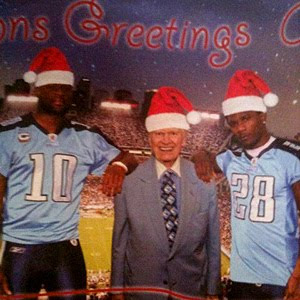 So everyone here in Tennessee is talking about who will it be: Jeff Fisher or Vince Young? Now, being kind of new here and not really a Titans fan anyway, I don't have much interest. I do know that Jeff Fisher has coached this franchise since Vince Young was like 10 years old and I believe that should count for something. But this is a business and it probably won't.
One thing that people are looking at is the Titans' 2010 Christmas card, as though this card holds some clue to owner Bud Adams's decision. And there are two ways to analyze this card.
Mike Florio of NBC Sports blogged about the card on January 1st and basically claimed to have cracked the mystery. Adams wants Young. Look at the card! It's Adams with Young and running back Chris Johnson. No Jeff Fisher in the picture.
The problem is that ESPN's Paul Kuharsky had already blogged about this card four days earlier. Kuharsky's article, though, points out some important information. First, the card is photoshopped. (Hopefully most intelligent people knew this after seeing the picture for themselves.) But more importantly, Kuharsky, who covers the AFC South, also noted that this card idea most likely originated in October. This was not something Adams put together in early-December to let the fans know who he was choosing.
I'm not making this an ESPN vs. NBC thing. But in this case, one article is obviously better than the other. Wedge and I don't get paid for this, and most of the time I'm just goofing off anyway. But I found it odd that a professional journalist published that misleading information. Then again I don't know why I'm so surprised.
Posted by Mike at 10:14 AM