Adam Dunn is thinking about quitting baseball.  We can't let this happen!

First of all, this situation creates very entertaining content on Chicago sports radio.  As bad as my Cubs are this year, it's pretty fun to listen to the media blast Dunn every day.

But more importantly, we need contracts like Dunn's (four years, $56 million) to work out terribly for teams and perhaps they will eventually begin to bring these salaries down to something a little closer to reality.  Hopefully, this would then allow ticket prices to drop, along with everything else related to attending a major league sporting event. 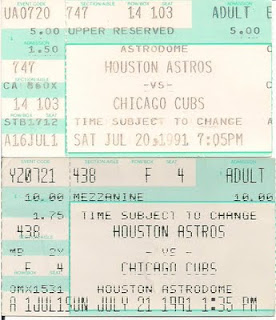 Twenty years ago, before player salaries were beyond outrageous, I attended a couple of Cubs games in the Houston Astrodome.  The first night, we went with the cheap seats and paid only $5 per ticket.  While the Astros now play in Minute Maid Park, you can use a seating chart to compare the seats and find a similar ticket today would cost $23.  I understand inflation, but that doesn't justify the price increase here nearly as much as salaries like Dunn's.  If I paid .50 cents for a Coke in 1991, according to this math, that same Coke would cost $2.30 today.

For the second Cubs/Astros game in 1991, we stepped it up and went with the $10 seats.  Similar tickets at Minute Maid Park today would cost $58.

It's pretty obvious to me.  We need players like Dunn and Alphonso Soriano to show up every day and collect their millions.  Maybe then baseball executives will stop handing out these absurd contracts.
Posted by Mike at 9:51 AM