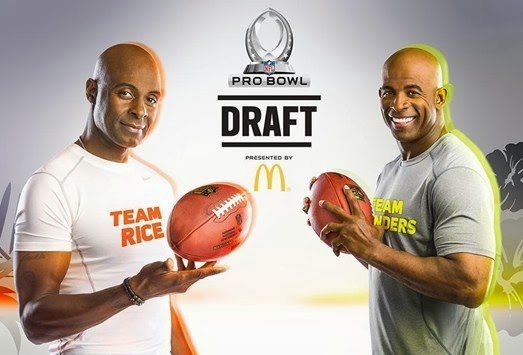 I don't know if I'll like the new Pro Bowl format or not, but I'm definitely OK with them trying new ideas. With Jerry Rice and Deion Sanders drafting teams, we're able to get matchups and teammates that we never would've seen in the past. Below is a quick preview of each position, the team I think has the advantage at that position, and my predictions for the game.

If you have Drew Brees, I'm likely giving you the edge, especially when he has his tight end. Philip Rivers and Alex Smith will be able to keep any lead that Brees builds up. I think we all know how Team Sanders' starter, Cam Newton, performed in his last Pro Bowl: 9-for-27 with three interceptions. Andrew Luck and Nick Foles will not be able to bring them back if Brees gets a lead.

LeSean McCoy is backed up by Demarco Murray and Matt Forte. That's pretty unbeatable. Jamal Charles is a great starter for Sanders, but I wonder how much he'll play. I'm not as confident in Eddie Lacy and Alfred Morris yet. I also think Rice's Mike Tolbert is a more effective fullback than Sanders' Marcel Reece.

Yes, you have to give the edge to the team with AJ Green, Dez Bryant, Antonio Brown, and DeSean Jackson. However, can Newton get them the ball? With Rice's quarterbacks, he'll be fine with Brandon Marshall, Josh Gordon, Larry Fitzgerald, and Alshon Jeffery. Plus, tight ends will be a huge factor. Leading us to…

Jimmy Graham and Tony Gonzalez, both members of Team Rice, are two of the best to ever play the game. Team Sanders' Jason Witten is good, and Jordan Cameron is a rising star. But this is not even close. I can't wait to see Brees with Graham and Gonzalez on the field at the same time.

I honestly do not know enough about NFL linemen and defenses to properly analyze other positions, especially in a game where very little defense is played. I would likely give Sanders the edge at kick returner (Cordarelle Patterson over Dexter McCluster) and kicker (Justin Tucker over Stephen Gostkowski), but neither player will probably have much of an impact.

Prediction - Team Rice by at least 14