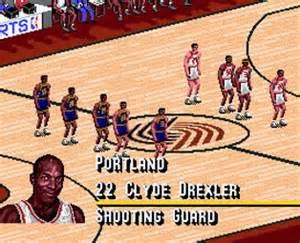 Blogathon is rapidly approaching! If you've checked out our 2014 Blogathon Preview Podcast, you know we've added some things this year, mainly a fantasy "pick 'em" contest where the three GBS participants picked the winners of a bunch of games taking place next weekend. When it came to NBA picks for some of the games happening on January 25-26, we had to get creative, since the three of us have likely combined to watch less than a quarter of professional basketball so far this season.

For me, there was only one logical way to pick my winners. I thought back to one of my all-time favorite video games: EA Sports' NBA Live '95. I simply asked myself, "Which team would win if I were playing Live '95?"

While you can hear most of my picks on the podcast, I figured I could break it down a little better here.

Now first of all, picking the Clippers, 76ers***, and Rockets was simple, since their opponents (Toronto, Oklahoma City***, and Memphis, respectively) did not exist in 1994-95. Below is a look at the other games we picked for our 2014 Blogathon Pick 'Em Challenge.

The Hornets have a good team on the game, featuring Alonzo Mourning, Larry Johnson, and Mugsy Bogues. They were also one of the better teams in the league that year. However, like most people, I was a huge Bulls fan back then, even in the non-Jordan years. Pippen, Kukoc, BJ Armstrong, and Steve Kerr were enough for me. (Also, the Bulls defeated the Hornets in the first round of the 1995 playoffs.)

The Hawks were the slightly better team in real life, finishing 7th in the East as the Bucks just missed the playoffs. But who really wanted to play with guys like Mookie Blaylock and Stacey Augmon? We were all huge Glenn Robinson fans back then, and he was dominant on the game, while Vin Baker and Arkansas's Lee Mayberry helped out as well.

Mahmoud Abdul-Rauf (AKA LSU's Chris Jackson) is one of my favorite players from this period, so it was hard to pick against him and Dikembe Mutombo. But along with the Magic, the Pacers were my favorite team on the game. I usually bench McKey and roll with Reggie, Smits, the Davises, and Mark Jackson.

The Bullets had some young talent, but it was nothing compared to Stockton, Malone, and Hornacek. This one was simple.

We liked Isaiah Rider and Christian Laettner, but Clyde Drexler was one of the most unstoppable players on the game. It was a tough one, but I had to go with Clyde.

OK, it wasn't necessarily a ton of fun playing with a team led by David Robinson. But how awesome was Dennis Rodman?! Overall, San Antonio was one of the most balanced teams, on the game and in real life. Glenn Rice was pretty awesome though. I wonder if the Heat have any good players today?

As a fan of the Bulls, Magic, and Pacers, I could never really root for the New York Knicks. But if I really wanted to beat someone on Live '95, they were a decent option, led by Starks, Ewing, Oakley, and Charles Smith. Van Exel and Ceballos were good players. But come on… you're not going to beat me if Vlade Divac is on your team.

***Speedgeek has reminded me that OKC would technically be the Seattle Supersonics on Live 95. I would never go against Gary Payton and Shawn Kemp in this matchup, so my pick has officially been changed.
Posted by Mike at 2:04 PM

I have to take exception with the OKC game. If you'd played the 76'ers with the Sonics (the former Thunder), you'd have destroyed Philly. There was no matching up with Shawn Kemp and Gary Payton.

Great point. I've applied this logic to my Tecmo Bowl predictions, so it only makes sense. I am officially changing my pick to OKC! Thanks.