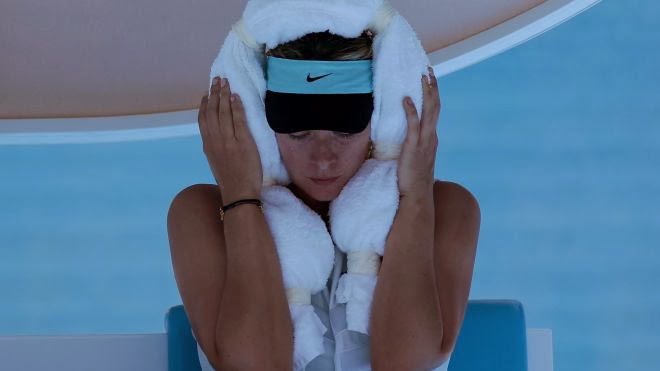 Watching Maria Sharapova sweat out an amazing victory against unranked Karin Knapp in the Australian Open, I began to wonder about why the women only play three sets. It was 107 degrees, and Sharapova needed every ounce of energy she could muster to defeat Knapp 10-8 in the third set. It was a perfect length for a tennis match, reaching something close to the 3:30 mark, and anything longer would've taken away from what both athletes had accomplished in giving us a thrilling match. An endurance test in the triple-digit temperature is not necessarily great tennis.

But the men play five sets. So why can't the women? WNBA games are slightly shorter than NBA contests (10-minute vs. 12-minute quarters), but women's college basketball uses the same 20-minute halves as the men. Did someone at some point purposely state that women just aren't able to play tennis for long periods of time?

Again, I believe three sets is long enough, even for men. If you're better than your opponent, you should be better when you're both fresh, not only when you're both tired. While the six-hour battle between Djokovic and Nadal two years ago was great to watch during our 24-hour Blogathon, I don't typically enjoy watching the same game for much longer than three hours, regardless of the sport. Then again, I also believe we should cap our movie lengths at 90 minutes. I have too many other things to do in life than to watch some three-hour movie or six-hour tennis match.

But my opinion aside, I'd love to know the official reason why women's matches are shorter. Anyone...?
Posted by Mike at 6:43 PM