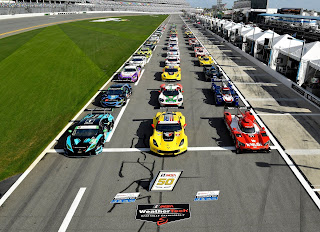 Each year here at Grab Bag Sports, we all look forward to SpeedGeek previewing each class featured in the Rolex24. Honestly, it's usually the only way I know which cars are even competing. But this year, SpeedGeek is a little busy, so I decided to pitch in and help out for once! I took a look at the cars who will be competing in the Daytona Prototype international (or DPi) class, and figured... how hard could this be?

Below are my predictions for how the eight DPi cars will finish in this year's Rolex24.

I just don't see any way the #85 car competes this weekend. After spending most of the offseason on the cusp of landing a Doritos sponsorship that ultimately fell apart, the team's lone selling point now is the rumor that actor Tony Danza may be taking a turn at the wheel. Veteran Kirk Regis can only drive so many hours, guys.

The #6 car comes in sporting a new type of hubcaps that is supposed be the future of aerodynamics. But after blowing both hangshifts in last year's race, there isn't much hope for them in 2020. Scott Dixon did recently call rookie driver Chad Lipscomb "the next Tom Sneva," but we're not sure what that even means.

Don't forget last year after three laps, the #77 looked like the car to beat. Unfortunately, the race has more than three laps. After having to visit the garage with a failed L-stick, it was a long 23 hours from there. As long as Corey "Coors" Light is logging hours behind the wheel, the team has a chance, but the other drivers (including Brett Riggs and Vince Fox) are just too inexperienced.

The #55 did take the cup at Dothan last year, but otherwise it was a pretty average season. The team insists on running with the older model pithoscope, but it does at least help conserve fuel. Keep an eye on Reginald Reeves who scored three Top 3 finishes last year.

We're hoping that the controversy of "Bumpergate" is well behind the #7 car at this point. But it's hard to forget drivers Ty Ketchum and Rock Robertson going at each other in pit row during the 21st hour last year. Expect the #7 to finish in the middle of the pack again.

Seriously, how many rugnuts can one car blow in 24 hours? For the #31 car, last year the answer was SIX. Yet Eric Descalso was behind the wheel in the 23rd hour with a chance to win when the water plug failed. Expect the team to compete again this year, especially after bringing veteran Steve "Big Mac" McCloskey on board for the 2020 race.

The #10 team has all the speed in the world and will be beta testing a new steelrod belt in this year's Rolex24. Jake Keppinger looks to build upon his 2019 success, which included wins at Salisbury, Hickory, and Clearwater. Add rookie hotshot Gordon "K-Cup" Kellet, and you have a team that should compete for the victory.

All things considered, however, my money is on the #5. Why? Well, let's see. Can you say "top speed vs. wind pressure per square mile" performance? If that wasn't enough, the team spent the offseason cutting down its brake timing rate (BTR), as well as its peripheral turn-independent speed (PTIS). With drivers Amy Montgomery, Chuck Franscioni, and Pete March taking turns at the wheel, it's hard to see this team losing this year.
Posted by Mike at 10:02 PM

This all feels....plausible? I guess I can put my DPi preview on ice now...

K-Cup is the future, kid is gonna dominate for years

Obviously not a fan. You have confused the nicknames of Gordon "Killer" Killer on the Konica team with JDM's driver Amy "K-cup" Montgomery.